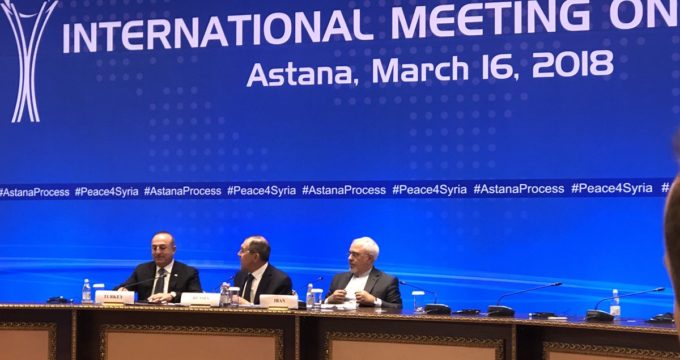 Zarif calls for settling Syria crisis with no foreign pressure

Reaching political solution on Syrian issues needs a realistic view, Zarif said on Friday on the side lines of the 9th round of Astana peace talks.

He expressed hope for the political process to be based on respecting sovereignty, territorial integrity and integration of Syria and also preventing the intervention of foreign countries.

Today we are on a turning point in relation to Syrian crisis, he said, adding that unfortunately conflicts are underway throughout Syria.

‘Since the start of Syria peace talks in the past 14 months, the meetings have been held at the ministerial level,’ Zarif said, adding that the summit would be convened in the near future, aimed at evaluating the achievements of the gatherings.

Thanks to Syrian military and its allies’ success in tackling Daesh terrorists and al-Nusra Front, Zarif said the important parts of Syrian soil were liberated from the grip of terrorists.

Establishing truce and creating de-escalation zones were important steps in ending war in Syria, he said, adding that Astana talks were a successful international process.

He also referred to sending humanitarian aid to war-torn areas as another part of the Astana talks.

Zarif went on to say that the committee of the detainees, kidnapped and the identification of missing persons and delivery of dead bodies were also established in Astana.

Having access to besieged areas and those which are in critical conditions were among other topics followed up in Astana meeting.

The three countries are considered as the guarantor states for the peace process.