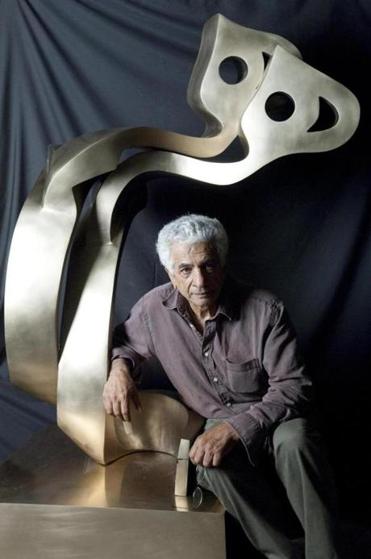 Press TV – Iranian iconic artist Parviz Tanavoli is globally renowned as a leading figure in the history of modern art and the founder of Iran’s modern sculpture.

Tanavoli pioneered the revival of the art of sculpture in Iran after centuries of its absence from the cultural life of the country. He is using motifs from Islamic and pre-Islamic times as well as popular and western arts, creating a hybrid of different time periods and cultures.

He was born in Tehran in 1937 and started learning different fields of art, including music, painting and sculpturing, since he was 10. In 1957, he went to Italy to study art at the Brera Academy of Milan for two years.

Upon returning to Iran, Tanavoli was appointed as the head of the sculpture department of the University of Tehran and continued working as a professional art collector.

For over six decades, the iconic artist has been producing sculptures, paintings, rugs and jewelry inspired by Persian and other exotic myths and cultures. He has also taken cuneiform scripts found on ancient monuments in Iran to create graphic symbols on his sculptures which look like words, but are actually hieroglyphic figures of his own invention.

The 77-year-old is currently working at his studios both in Vancouver and in Tehran, staying as prolific as his early years as an artist.

“The age has not changed me. I work the same as I used to work 30 years ago. I do not get tired of my work,” he said in a 2016 interview at Davis Museum in Massachusetts.

Apart from his signature in Iranian sculpture, Tanavoli has also created autonomy for himself as a leading modern artist of non-Western background.

“I have my own vocabulary. This vocabulary has caused me to [find] certain autonomy. It is just mine. It is not following any of the western schools,” he said.

In a documentary about Tanavoli’s artistic life, “Poetry in Bronze,” Canadian multidisciplinary artist Hank Bull rejected the stereotype which considers modernism as a European story and argued that modernism, like modernity itself, is a global phenomenon as there have been amazing movements of modern literature and art in Latin America, Asia, Africa and all over the world.

“In fact modernism happens all over the world at the same time and a figure like Parviz Tanavoli looms large in that history,” Bull pointed out.

Tanavoli’s works have transcended the limits of place and time as they have already led to an unimaginable artistic movement in his homeland.

“Parviz will be relevant well beyond our times and his pieces will be looked back and people will see them as important milestones in the Iranian modern art,” said Middle East art expert Saeb Eigner in the documentary.

In 1965, Tanavoli held a large exhibition in Tehran which became a total failure due to its extremely progressive and non-conformist approach towards art. The show received harsh criticisms as connoisseurs thought he was making mockery of the history of art by producing sculpture out of junk materials.

The show was closed after three days, because the gallery owner was scared of the highly negative reactions of the visitors.

“Then I decided to stop doing what I was doing and practically do ‘nothing.’ The idea of nothingness – an important concept in sophism- grew in me. The only thing came to my head was the word Heech (nothing) itself in Persian writing; it has a figure; it has a head; it has eyes. I did that and I did not know that people are going to love that so much and it is still with me,” he said in a 2016 interview at the Grey Art Gallery of New York University.

“The word Heech, or nothingness, has a special place in our culture. The Idea of making nothing that was for me enough, but later I realized great Iranian poets like Khayam, Rumi and Hafez all had dealt with this single word,” he said.

Tanavoli views nothingness, not through the bleak western existential view, but from the viewpoint of mystical sophism.

In 1964, Tanavoli started embodying the concept of “Heech” into a series of sculptures that would later became his best known works.

The aesthetic beauty of the word “Heech” in Persian Calligraphy also inspired Tanavoli for decades to dedicate decades of his life to create hundreds of renditions of the mystical concept.

Some examples of Tanavoli’s Heech sculptures are exhibited at permanent collections of important international museums, including, New York’s Metropolitan Museum of Art, British Museum in London, Vienna’s Museum of Modern Art and Olympic Park in Seoul.

Cages are also another recurrent theme in Tanavoli’s works, but unlike the general perception, the motif represents a poetic concept for the artist.

“In the chest of the poet there is a cage and in this cage there is a nightingale. The nightingale keeps singing and that is what makes the poet so creative and so moving,” he says.

“If you have to put a label on me, it would be poet, because I like poetry and in any ways that I could explain myself I will do it,” Tanavoli said in the “Poetry in Bronze” documentary.

Tanavoli is deeply optimistic about the prospect of sculpture and art in Iran and calls on the global community to have a better understanding of the realities of art in Iran.

“During the past 50 years, the Iranian art has evolved tremendously. We have thousands of sculptors. I think this is a good time to show the new face of the Iranian art,” he said.