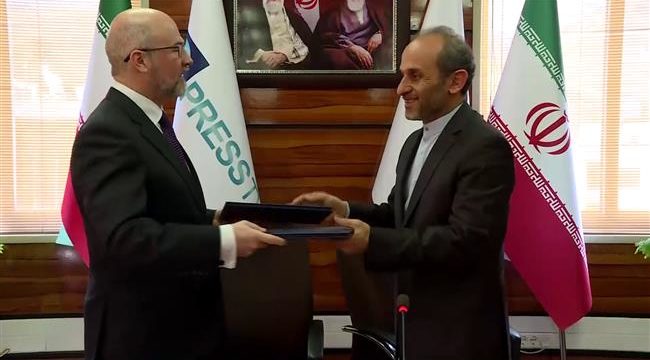 The MoU was signed in Tehran on Monday during a meeting between the CEO of the IRIB’s World Service Peyman Jebelli and RT’s Managing Director Alexey Nikolov.

During the meeting, Jebelli lauded RT for its accurate and brave reporting, saying, “When we look at the Russia Today, we see that it is not only a very powerful and a very different voice among the big media of the world, but we also consider it an accurate and brave voice confronting mainstream Western media.”

The CEO of the IRIB’s World Service then noted that the RT media stream has turned into a very creative discourse among the world media, adding that RT’s progress was owed to the leadership role and support of Russian President Vladimir Putin.

“For 40 years, we have been subject of many pressures and many sanctions and many limitations,” Jebelli said in reference to restrictive measures taken by the Western countries against Iran following the victory of the Islamic Revolution in 1979.

The West led by the US, first demonized Iran in the public opinion of the world and the region in order to justify their sanctions on Iran.

The Iranian official stated that “I think it was very difficult for the US to lose its big ally in the region” as a result of the Islamic Revolution, noting that “they are still trying to mount pressure on Iran to [make it] return to that [pre-revolution] period and make Iran their ally in the region again.”

Jebelli noted that the powerful influence that Iran and Russia swayed in the region was natural and because of the two countries’ deep roots in the region.

He added that despite the minor differences that exist between the two news channels, “both of us have the same aim, have the same target, [and] have the same goal,” which is to introduce a new discourse to the world of media and “we can have good cooperation with each other.”

For his part, the RT’s managing director said this was the first such visit which had happened in many years and expressed hope it would lay the ground for “long-lasting cooperation” between the two sides.

“RT and Press TV have a lot in common. Both of our news organizations aspire to bring to the world what we can call the alternative news agenda,” Nikolov said.

“We want to look at the other side of the news. We believe the world and the audiences deserve to know more than one side of the news, the side that has been shown to them and presented to them for many years, and that’s the reason why our job is going to be more and more difficult, but we are prepared for that,” he added.

Nikolov expressed his gratitude over the opportunity created to share RT’s experience with Press TV and said that RT was prepared to cooperate with the Iranian channel on a number of issues.

“We are looking forward to working with Press TV and with our Iranian colleagues for the many years to come,” he concluded.

Following the meeting, the RT managing director, along with his accompanying delegation, toured various sections of Press TV, including its newsroom and website, and talked to their staff.