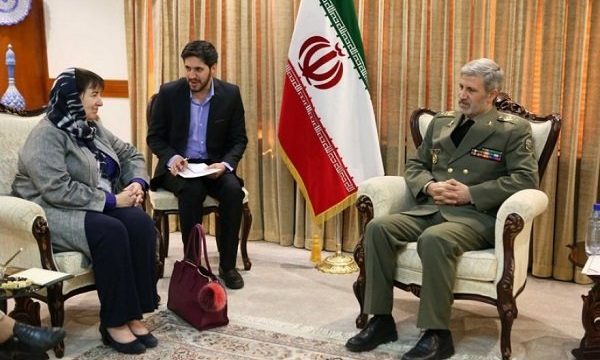 MNA– In a meeting in Tehran with the Netherland’s ambassador to Iran, Brigadier General Amir Hatami urged the Netherlands as a non-permanent member of UNSC to prevent Saudi Arabia from killing more innocent Yemenis.

In the meeting, Hatami referred to the long history of relations between Iran and the Netherlands and emphasized the interest of the Islamic Republic of Iran in developing defense relations with the European country.

Brigadier General Hatami told the Netherlands’ ambassador that the instability in the region is partly due to the conditions in the region but a large part of it goes back to the interference of foreign powers.

He further explained that the Americans have confessed to creating ISIL and they are now transferring it to the east.

Referring to the fact that Iran only wants its missiles for defense purposes and it has not attacked any other countries, the defense minister also pointed out that Iran cannot protect itself against threats without its defensive capabilities, meanwhile, it respects the sovereignty and integral territories of other countries.

He pointed to the appalling humanitarian situation in Yemen, and called on the Netherlands, as a non-permanent member of the UN Security Council to prevent Saudi Arabia from killing more innocent Yemeni women and children.

The defense minister also referred to US’ unfounded claim that Iran provided missiles to Yemen, saying “while Yemen is under siege and medicine and food cannot get there, sending weapons and missiles to Yemen is by no means possible.”

Brigadier General Hatami added that the Americans and their allies’ claims regarding Iran’s involvement in sending arms to Yemen are aimed at diverting the public opinion from the crimes committed in Yemen.

The Dutch ambassador, for her part, referred to the efforts to develop relations between Iran and the Netherlands, saying “the Netherlands is interested in developing defense relations with the Islamic Republic of Iran.”

Susanna Terstal also stated that the Netherlands wants to establish peace and security throughout the world, and this issue is of great importance to its country’s authorities, adding it has done a lot in that regard.