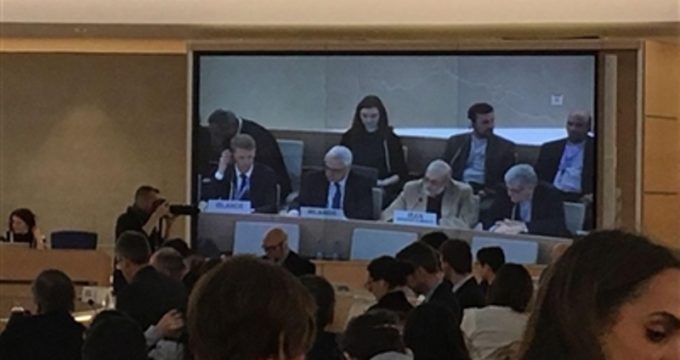 Tehran considers appointment of country mandate holder for Iran based on dual standards and as an ill-intended, and politically motivated action, orchestrated by a few numbers of the Council members, Mohammad Javad Larijani said in a speech at the 37th session of the Human Rights Council held in Geneva.

What follows is the full text of the statement by Larijani in his capacity as secretary general of the High Council of Human Rights of the Islamic Republic of Iran on the report of the special rapporteur on the situation of human rights in Iran at the Geneva conference.

Mr President,
At the outset, I seize this opportunity to congratulate you for appointment as the new President of the Human Right Council. I also extend my condolence to the family of Mrs Jahangir.

Mr President,
The designation of a country-specific human rights Rapporteur for a country like Iran that is consistent with its obligations toward its citizens and the international community is fundamentally unnecessary. In addition, the mechanism of the country’s Rapporteur, at the United Nations, must be based on professional, just, impartial, fair and non-political principles. It should be noted that the Human Rights Council has been established to prevent double-standard behaviors, and that the UPR mechanism is to be based on the equal responsibility of all countries; hence, such a mechanism should not be weakened by parallel actions.

Therefore, as a principal position, we consider appointment of country mandate holder for Iran based on dual standards and as an ill-intended, and politically motivated action, orchestrated by a few numbers of the Council members. Though, respecting the recommendation of some other members of the Council, some we did our best to establish a constructive dialogue with them, the latest was last September in Geneva, when the late Madam Jahangir met a high ranking Iranian judicial delegation.

Mr President,
Iran is a country with a great nation and long history of prodigious civilization, which has offered the world heritage countless affirmative contribution. Throughout the history, Iranian identity, enthused by the noble teachings of Islam, expressed itself with justice, rectitude, munificence and respect for human dignity. Within that cultural space, the Islamic Revolution in 1979 ensued with the main goal to establish a democratic polity and a social and civil order based on Islamic rationality.

Iran as a founding member of the United Nations and party to the major international human rights instruments at the same time upholding the promotion of principles enshrined in its constitution and while ensuring its compliance with the relevant international commitments, has taken a genuine and long-term approach to safeguard and promote human rights at national and international domain. Based on the real situation, I can solemnly confirm that we have done a lot and have a firm conviction to continue to build on the progress achieved thus far.

Mr President,
To inform this august meeting, let me mention a number of very recent achievements in civil, political, economic, social and cultural rights in my country:

– The people of Iran once again freely have chosen the four-year path of the country’s future in May 2017, by participation in a free and democratic Presidential election.

– The amendment to the ‘Anti-Narcotics Law ‘, passed by the Parliament, in July 2017, recognized as a ‘significant progress’ by the UN Secretary General and High Commissioner for human rights, as a result of which the use of death penalty will be restricted to very limited severe drug-related offences and it could dramatically affect hundreds of inmates on death row .

– The enforcement of the Charter on Citizens’ Rights was another outstanding national achievement in the field of human rights based on which the President ordered all branches of the government to implement the Charter and report back on the implementation and progress achieved.

– Comprehensive new bill on combating violence against women is expected to be forwarded to the Parliament in coming months.
– Adoption of the bill to protect children and juveniles in the Judicial and Legal Commission of the Parliament.

Mr President,
I regret to say that the report presented to the Council on behalf of late Ms Jahangir, suffer from serious flaws: it lacks any reliable methodology; it is without any acceptable scrutiny algorithm; it is totally biased and functionally evading main limits of the approved mandate.

We firmly believe that selective country specific resolutions will reduce human rights noble concerns to manipulative devices of political rivalry. Therefore we are strongly of the view that these unwarranted acts and unjustified political maneuvering with the noble cause and objectives of human rights concerns should be terminated as soon as possible, paving the way for sincere, frank and constructive cooperation for the promotion of human rights objectives.

Mr President,
The report before us, deliberately avoided any significant reference to human rights promotional policies of the Islamic Republic of Iran and its cooperation with the international human rights mechanisms. Iran is making unprecedented strides into the new historical stage of democracy, prosperity and the rule of law.

The process of reform and evolution In Iran is in fact a genuine product of a dynamic society, and certainly not a product of politically motivated external pressures. It is obvious that no instrument in human rights barometers is stronger than a government’s enthusiasm and commitment to promote and protect the human rights and fundamental freedoms of its entire nation.

Mr President,
To be more precise, I would like to draw the attention of the Council to a few issues in the draft report as follows:

– Taking into account the statistics provided in the draft Report, shows that 7 out of 9 communications from the special procedures responded by my country, which demonstrates a rate of 77% of response and an indication of Iran’s constructive and expanding cooperation with the Special Mandate Holders.

– The draft Report has cited numerous statements and press releases issued by SR, other Special Procedures and the Office of the High Commissioner for Human Rights on numerous occasions. Many of these cases have already been adequately addressed and responded by Iran and have been criticized for their unwarranted issuance prior to consultation with the country concerned.

– After repeated calls by Iran on the need for condemnation of the anti-human rights sanctions against Iranian citizens, the SR in the last draft report, although late, finally conceded the harmful effects of sanctions on the rights of Iranian citizens.

– As the Rapporteur has acknowledged, the adoption and implementation of the new law on combating narcotic drugs, will significantly reduce the number of executions of drug offenders. The thirty-year-old performance of the Islamic Republic of Iran has shown that through identifying necessities and evaluating efficiencies, it has always sought to formulate appropriate and efficient laws, and this process will continue as necessary.

– A considerable portion of the report actually defend those who have committed, with no mercy, heinous crimes and violated human rights of innocent Iranian citizens. Therefore, victims of the crimes committed by murderers, armed drug dealers, terrorists, organized gangs and spies have the right to question the veracity and credibility of the report. Its persistence in disparaging the Government’s decisiveness and dedication to protect people’s safety and security, is staggering.

– For thousands of years Iran has been a safe heaven for minorities. However, fabrication of non-existent situations in the report that implies division and intolerance in society, is absurd. Of course, everyone, regardless of religion or ethnicity is equal before the law. Belonging to a minority doesn’t impel impunity. Followers of all faiths enjoy equal freedom as other citizens and are protected by law.

Mr President,
In the Islamic Republic of Iran, the issue of fair trial is emphasized in the Constitution, in the criminal procedure law and in other ordinary laws in all stages of the proceedings, from discovery, investigation and trial to the enforcement of judgments, regardless of race, religion, gender, and ethnicity of people under consideration. The observance of the principle of innocence and the necessity of the legality of crimes and punishments are taken into account in Article 37 of the Constitution and in Articles 2 and 12 of the Islamic Penal Code. Accordingly, no one shall be convicted in law unless his or her crime is proven in the pertinent competent court.

The current laws of the country ensure fair trial standards, including immediate access to lawyers, so that a significant number of lawyers and legal advisers are run under the supervision of lawyers’ associations in different regions of the country and relevant centers for the provision of judicial and legal services.

Finally, Mr President, based on these observations and with regard to our principled position, the Islamic Republic of Iran continues to insist that the appointment of the Special Rapporteur was an inappropriate and unjustified decision that would lead to the weakening of the Human Rights Council’s credibility as a body that must confine its activities to the provisions of international law. And again we reiterate our commitment to constructive and frank cooperation with the UN human rights mechanisms, specially the HRC.