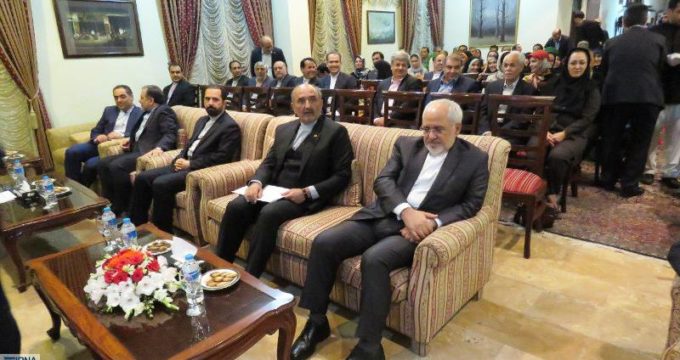 IRNA – Foreign Minister of Iran Mohammad Javad Zarif says that Iran and Pakistan enjoy exemplary ties which can be a precedent for the Iranian government to enhance its relations with other countries of the world.

He said this during a meeting with Iranian diplomats and Iranian officials at the Embassy of Iran in Islamabad. Ambassador of Iran to Pakistan Mehdi Honardoost was also present in the meeting.

Zarif on the occasion congratulated Iran and Pakistan on the 70th anniversary of the diplomatic relationship saying that Iran was the first country to recognize Pakistan and both countries have always stood with each other in difficult times.

He further appreciated the efforts of the Iranian ambassador to promote relations between the two countries, especially the economic cooperation.

He said that Iranian Embassy and consulates general have to play more active role in strengthening ties with Pakistan.

Zarif went on to say that past two years witnessed a major boost in Iran-Pakistan relations.

He noted that the defense ties between the two countries have also improved and Pakistan Army Chief General Qamar Javed Bajwa also visited Iran which is a major development.

He further added that the development of a sustainable economy is a key priority for the current Iranian government along with enhancing ties with the neighbors.

The minister said that if we want to live peacefully in today’s world then we have to give extra attention to the expansion of relations with neighbors in our foreign policy.

Mohammad Javad Zarif added that Pakistan is an important country for Iran because two countries share many common objectives.

He noted that Supreme Leader Ayatollah Ali Khamenei has always stressed the importance for enhancing ties with Pakistan and the people of Iran are very close to the people of Pakistan.

Ambassador of Iran to Pakistan Mehdi Honardoost welcomed Foreign Minister Mohammad Javad Zarif and his delegation in Pakistan. He said that in past nine months Iran-Pakistan trade ties have witnessed a growth of 50 percent.

He added that Iranian embassy in Pakistan and consulates in other cities will take all measures to further strengthen ties with Pakistan in all sectors especially the economic field.