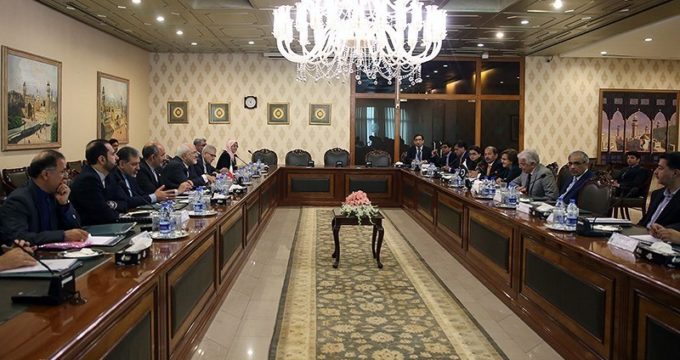 Iran, Pakistan call for closer cooperation in all fields

Iran’s Foreign Minister Mohammad Javad Zarif, who is visiting Pakistan at the head of a politico-economic delegation, has sat down for talks with his Pakistani counterpart Khawaja Asif.

Vice-President for legal affairs Ms. Laya Joneydi in a meeting with new Chilean President Sebastian Pinera in Santiago on Sunday underlined expansion of ties and confrontation with extremism and terrorism.

Ten bodies of the eleven people on board the Turkish private jet that crashed in the west of Iran have been found, according to the Iran’s Red Crescent Organization.

The Turkish private plane’s crash in western Iran could have been caused by an engine fire, Mojtaba Khalidi, spokesman for the Emergency Center said on Sunday.

An Iranian delegation including members of the armed forces arrived in the Qatari capital to attend the Middle East Naval Commanders Conference (MENC).

Iranian Foreign Minister Mohammad Javad Zarif said the Iranian government is ready to commit itself to provide safe and reliable energy, be it oil, gas or electricity.

A preliminary report by the Civil Aviation Organization of Iran has mentioned medical history of the pilot of an ATR passenger plane that crashed in southwestern Iran in February, citing his open-heart surgery and the medical limitations in his license.

Forces with Iran’s Islamic Revolution Guards Corps (IRGC) have foiled twin bomb attacks in a southeastern city near the country’s border with Pakistan, killing two terrorists in the operation.

Austrian police say they have no information yet on the motives of a man who attacked a guard outside the Iranian ambassador’s residence in Vienna and was then fatally shot.

Foreign Minister of Iran Mohammad Javad Zarif said despite all hurdles, trade between Iran and Pakistan is improving and last year witnessed growth of 35 percent in bilateral trade volume.