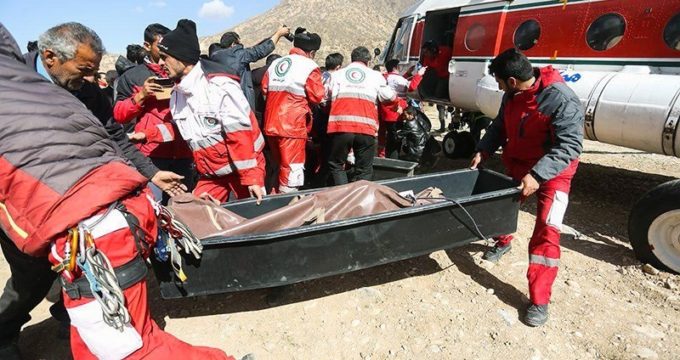 MNA – Ten bodies of the eleven people on board the Turkish private jet that crashed in the west of Iran have been found, according to the Iran’s Red Crescent Organization.

A Turkish private jet heading towards Istanbul from UAE’s Sharjah caught fire while crossing over Iranian air space and hit Mount Helen in Chaharmahal and Bakhtiari province of Iran on Sunday afternoon.

Iran’s Red Crescent Organization (IRCS) said that it dispatched 10 rescue teams to the site of the Turkish private jet soon after the incident.

The black box of the private Turkish passenger jet was recovered on Monday.

The search teams faced difficulties in reaching the site as it was a mountainous region.

According to some preliminary statistics, the aircraft had three crew and eight passengers on board. It is said that the plane had fallen due to an engine failure. It was also reported that the villagers had seen the plane falling down.

According to the Turkish Transport Ministry the plane belonged to wealthy Turkish businessman Huseyin Basaran, whose daughter and her friends were among the 11 people killed.

Meanwhile, the President of the Turkish Red Crescent Kerem Kinik confirmed on his Twitter account that all eight passengers on board were killed in the incident.

The Managing Director of Red Crescent Organization of Chahar Mahal and Bakhtiari Province told reporters on Monday morning that the search teams would begin taking down the bodies from the mountain on Monday morning.

According to Chaharmahal and Bakhtiari Red Crescent Organization, the families of the Turkish victims have arrived in Shahr-e-Kord, the capital city of the province, as the investigations into the causes of the incident have begun. Meanwhile, the black box from the plane has been found and the bodies are identifieble.

The local people of the region have found 8 bodies out of 11 people on board the plane in the Durk Anari Kyyar region.

According to Turkish media, the female pilot in her last contact with the control tower had requested for an emergency landing a while after the plane had taken off, and that request had been registered.

Mohammad Ebrahim Taherian, Ambassador of the Islamic Republic of Iran to Turkey, expressed his regrets and sympathy to the families over the incident.