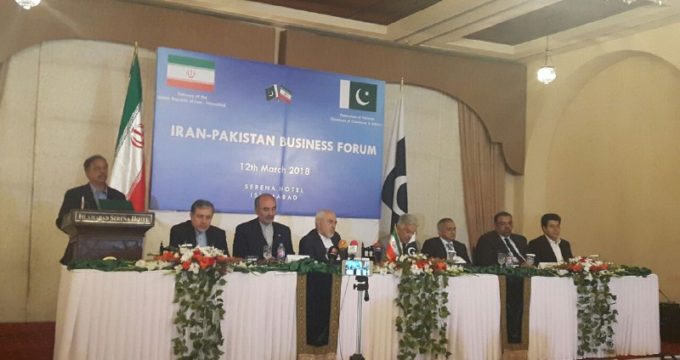 IRNA – Foreign Minister of Iran Mohammad Javad Zarif said despite all hurdles, trade between Iran and Pakistan is improving and last year witnessed growth of 35 percent in bilateral trade volume.

Addressing the Iran-Pakistan Business Conference in Islamabad on Monday, he said Iran has entered with its full strength to the arena of relations with Pakistan to boost comprehensive relations in all fields of trade and economics.

“On the 70th anniversary of Iran-Pakistan diplomatic relations inception, I am so pleased of my presence in a gathering which can play an important role in enhancement and improvement of economic and trade ties between the two countries,” he said.

Benefiting of rich cultural, national and religious commonalities accompanied by peaceful, long lasting ties, he added, ‘We should activate our economic capacities and potentials to more complement our economies in the fields of business, trade, supplies and requirements provision and tourism industry.’

He noted that in view of the target set by the high ranking officials of the two countries in 2016 to extend the level of business transactions up to five billion dollars through five years, two sides should contribute and allocate more efforts to not only realize this highly designated target but surpass it also.

Zarif said volume of trade between Iran and Pakistan doesn’t commensurate with existing high capacities and potentials, which are even commendably rising. “The most important factor in the discussion on economic ties elevation should be establishment of banking connections between the two countries.”

However, he added, it is worthy to mention that, inspite of all the hurdles and barriers like absence of banking transactions and some customs related issues we experienced 35 percent growth in economic transactions in the last year.

Zarif went on to say that the increase shows the existence of significant potential and capabilities in the field of business cooperation between the two countries. “In case of establishment of banking relations and achievement of Free Trade Agreement (FTA), volume of trade transactions between the two countries will be significant and impressive.”

“I can declare that Iran has entered with its full strength to the arena of relations with Pakistan to boost comprehensive relations in all fields of trade and economics and looks for the positive response of the Pakistani friends, Pakistan has been 8th exports destination of Iran during last 10 months and presence of high level delegation comprising of private sector along with me shows resolve of the Islamic Republic of Iran to further boost business ties with the friendly and brotherly country of Pakistan.”

‘I would like to reiterate we are still ready to supply energy requirements of Pakistan including in the field of oil, gas and electricity at any level of requirement swiftly,’ Zarif said.

“In line with fulfilling our commitments in “Iran-Pakistan gas pipeline agreement,’ he said, Iran has spent so far more than two billion dollars to build IP gas pipeline. ‘So we are looking forward to practical steps from our Pakistani friends to act on their commitments in the Iran Pakistan Gas Pipeline Agreement.”

Zarif said Iran welcomes to join any project including CPEC which brings welfare for the people of our region who has been facing tragedies like imposed wars and sectarian tensions during recent decades.

Iran’s joining with CPEC will facilitate the conversion of Gwadar and Chabahar ports to complementary ones and then on one will consider these two ports as competitor to each other, he added.

“We welcome any type of presence and participation of Pakistani investors and companies in Free Zone of Chabahar.”

He stressed that Iran’s experience in the various fields of science, industry, high technology, Nano technology, construction of dams, roads, highways, big power plants and technical and engineering services can be significantly helpful in acceleration of development and industrial related projects in Pakistan, as well in CPEC projects.

“In this regard, we have complete readiness to share our related experiences with Pakistani brothers,” the Iranian foreign minister said.