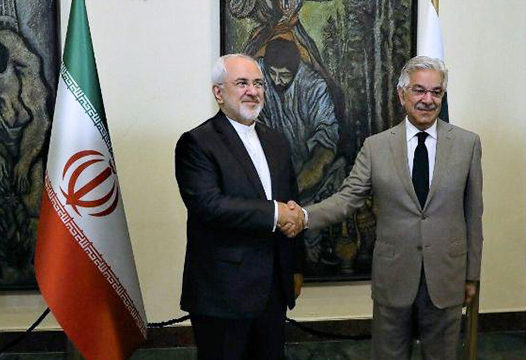 Iran, Pakistan call for closer cooperation in all fields

IFP- Iran’s Foreign Minister Mohammad Javad Zarif, who is visiting Pakistan at the head of a politico-economic delegation, has sat down for talks with his Pakistani counterpart Khawaja Asif.

Speaking in the meeting in Islamabad on Monday, Zarif called for closer cooperation in political, economic, cultural and security fields.

“It’s essential for Iran and Pakistan, as two friends and neighbours, to engage in close cooperation to ensure security of their common borders and prevent the penetration of terrorists,” he said.

Asif, for his part, stressed the need for expansion of ties between the two countries, saying the Pakistani government is ready for developing political and economic cooperation with Iran.

“We want borders of both countries to be secure,” he said.

Zarif and Asif discussed the peace process in Afghanistan, expansion of banking and energy cooperation, the export of electricity from Iran to Pakistan, cooperation between Chabahar and Gwadar ports, and expansion of border market.

The two officials further talked about issues of the Muslim world, facilitation of visiting Mashhad for Pakistani Shiites, multilateral economic cooperation to help promote peace and stability in the region, and the fight against terrorism and extremist groups and drug traffickers.

The two top diplomats also commemorated the 70th anniversary of the establishment of relations between the two countries.