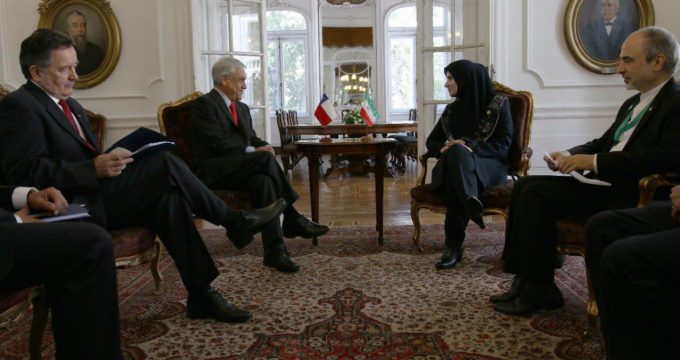 IRNA – Vice-President for legal affairs Ms. Laya Joneydi in a meeting with new Chilean President Sebastian Pinera in Santiago on Sunday underlined expansion of ties and confrontation with extremism and terrorism.

Joneydi, who is representing Iran’s government in Santiago at the head of a delegation to attend oath-taking ceremony of new president held talks with President Pinera.

Pinera praised Iran’s ancient glorious history and culture and expressed the hope that Iran’s civilization and history exhibition would be held in Santiago next year.

Ms. Joneydi conveyed warm greetings of President Rouhani to his new Chilean counterpart and called for continuation of development of ties between the two countries as it was in the past few years.

She called for increase in mutual cooperation between the two countries in different fields, especially in international organizations.