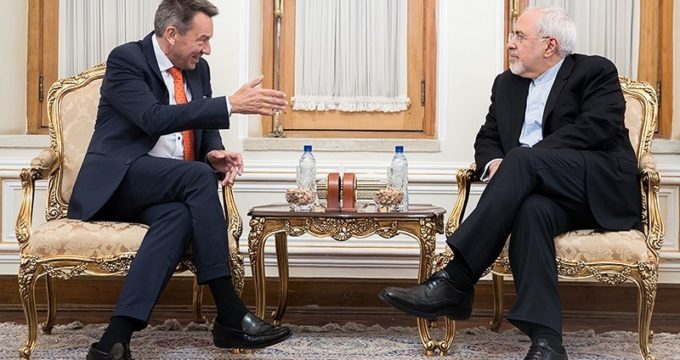 MNA – During a meeting on Sunday in Tehran, Peter Maurer ICRC’s President and Mohammad Javad Zarif Iranian Minister of Foreign affairs called for an immediate halt to war in Yemen.

The President of the International Committee of the Red Cross (ICRC) Peter Maurer who is visiting Tehran met with Iranian Minister of Foreign affairs Mohammad Javad Zarif on Sunday in Tehran.

The ICRC chief reassured the Iranian foreign minister that the committee is determined to continue cooperation and dialogue with the Islamic Republic of Iran on the most important humanitarian problems in the region including the humanitarian crisis in Iraq, Syria, and Yemen.

Also the recent developments in Syria, especially in Eastern Ghouta where the civilians have been captured by the terrorists as human shield, were discussed by Mr. Zarif and Mr. Maurer.

The two sides underlined that the civilians should be immediately evacuated from the zone and the humanitarian reliefs should be continuously delivered to them.

Call for immediate halt to war in Yemen in order to deliver medical aids and food to the people of that country was another area of the two sides’ conversation.

Iranian top diplomat, in this meeting, for his part, voiced his deep sorrow at what is going on in Iraq, Syria, and Yemen.

“The Islamic Republic of Iran will put its best efforts into relieving the pains and sufferings of the war-hit people of Syria and Yemen with dispatching humanitarian aids to the people of these two countries,”