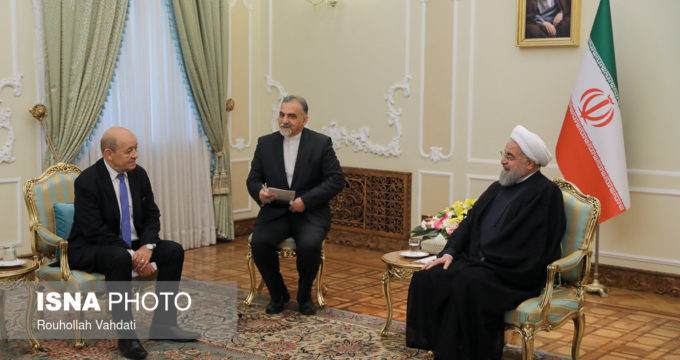 Zarif says Israeli occupation of Palestine will not last long

The Islamic Revolution Guards Corps held an exhibition of its latest achievements in various fields of the military industry.

Mossad had a plan to assassinate 15 Iranian scholars and spend two billion dollars to attack Iran, wrote a Zionist journalist in his latest book.

Iran won’t talk to US, extra-regional states on its regional role: Ayatollah Khamenei

Leader of the Islamic Revolution Ayatollah Seyyed Ali Khamenei says the Islamic Republic will not hold talks with the US or other extra-regional countries about its regional presence.

Dr. Zarif, Foreign Minister of the Islamic Republic of Iran.

Extremist Shia community behind attack on Iran embassy in London

Iranian Ambassador to the United Kingdom Hamid Baeidinejad says the Shirazi cult, whose followers raided the Iranian embassy in London on Friday, is an extremist Shiite group that insults grand Sunni leaders.

Hossein Jaberi Ansari, a top aide to Iranian Foreign Minister in special political affairs, has held talks with President of the International Committee of the Red Cross (ICRC) Peter Maurer.

The Russian, Turkish and Iranian foreign ministers plan to make a joint statement during their meeting on Syria in Astana on March 16, Kazakhstani Foreign Minister Kairat Abdrakhmanov told reporters on Wednesday, speaking in the republic’s lower parliamentary chamber.

Saudi Arabia and Britain have decided to finalize a multi-billion-dollar deal for the sale of 48 Typhoon aircraft to Riyadh, despite massive protests against London’s arms supply to the Arab kingdom during its deadly war against Yemen.

An official with the Palestinian Authority (PA) says top Israeli and Saudi officials held a series of secret Egypt-brokered meetings in Cairo, last week, as more signs emerge of warming relations between the two regimes.

Questions have emerged about whether the US Treasury Department’s Office of Foreign Assets Control (OFAC) has issued new licenses to Canadian plane manufacturer Bombardier Inc. to sell passenger aircraft to Iran. If true, it would be the first such approval since President Donald Trump took office and comes at a time when Tehran is trying to overcome financing challenges associated with aircraft deals signed in the aftermath of its nuclear accord with the six world powers.

The Russia-led Eurasian Economic Union (EEU) could welcome Iran as a new member in May, according to Russia’s Energy Minister Aleksandr Novak.

French Foreign Minister Jean-Yves Le Drian said on Monday that cultural exchanges will help deepen and broaden relations and cooperation between Tehran and Paris and such cooperation has increased dramatically in the contemporary century.

The 1200-hectare greenbelt plan around capital city of Tehran was inaugurated in the presence of President Hassan Rouhani on Tue. to celebrate Natural Resources Week and Arbor Day.

A festival of local games has been held in the city of Dalaki in Dashtestan County of Bushehr Province, southern Iran, on March 5.

It is the oldest preserved edifice of its type in Iran and a prototype for later mosque designs throughout Central Asia. The complex, covering more than 20,000 m2, is also the first Islamic building that adapted the four-courtyard layout of Sassanid palaces to Islamic religious architecture.

A new digital encyclopedia on Iranian Cinema called ‘Cicinema’ will be launched concurrent with the start of the 36th edition of Fajr International Film Festival (FIFF36) in April.