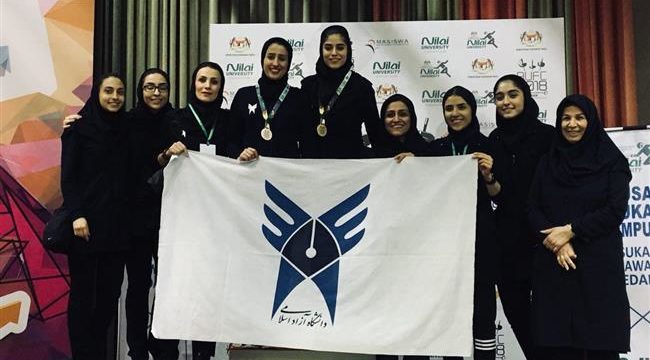 Press TV- Iranian fencers have delivered great displays of physical skills and agility at the 2018 Association of Southeast Asian Nations (ASEAN) University Fencing Championship in Malaysia, and collected nine medals in the tournament.

Amir Reza Kan’ani, Mohammad Ali Kayhani and Hossein Ja’fari made the Islamic Republic proud on Saturday after they respectively bagged all the available medals in the men’s épée event of the competitions held in the western Malaysian town of Nilai.

The épée is the modern derivative of the dueling sword used in fencing. As a thrusting weapon, the épée is similar to a foil, but has a stiffer blade, which is triangular in cross-section with a V-shaped groove called a fuller, has a larger bell guard, and is heavier.

There are no rules regarding priority and right of way in the épée competitions, and the entire body is a valid target area.

Separately, Najmeh Sazanchian won a gold medal for Iran in the women’s sabre contests. Faezeh Rafiei also claimed the second spot, and took the silver. Indonesian and Malaysian fencers took away the bronze.

Sabre is a light cutting and thrusting weapon in the sport of fencing. In the sabre section, the entire body above the waist, except the weapon hand, is targeted. Hits with the entire blade or point are valid. Touches that land outside of the target area are not scored.

On Friday and the opening day of the tournament, Azam Bakhti struck gold in the women’s épée individual event. A representative from Singapore finished second and won the silver.

Mahsa Pourrahmati, also from Iran, settled for the bronze medal.

Additionally, Javad Rezaei got the silver medal in the men’s foil individual competitions.

A foil is one of the three weapons used in fencing, which is flexible, rectangular in cross section and weighs less than a pound (0.453 kilogram).

As with the épée, points are only scored by contact with the tip, which in electrically scored tournaments is capped with a spring-loaded button to signal a touch.

A foil fencer’s uniform features the lame – an electrically conductive jacket wired to define the scoring area and record hits.

The 2018 ASEAN University Fencing Championship started on March 8, and will finish on March 11.