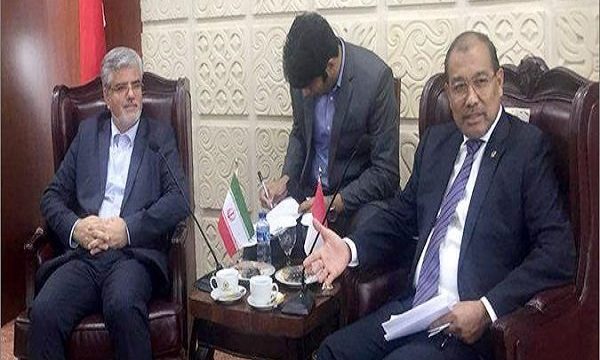 An Iranian delegation led by Mahmoud Sadeghi met with the Deputy Speaker of the Indonesian People’s Representative Council Fadli Zon in Jakarta, Indonesia on Saturday, during which Sadeghi pointed to the friendly and positive relations between the two countries in various fields, saying “the Iranian-Indonesian Parliamentary Friendship Group seeks to expand political, economic and cultural relations between the two countries, and welcomes and supports any action in this regard.”

Referring to extremism as one of the problems of the Islamic world, the Head of Iran-Indonesia Parliamentary Friendship Group stated “the Islamic Republic of Iran and Indonesia, as the two major countries in the Muslim world, can help resolve the problems of extremism and the terrorist groups in Islamic countries.”

Pointing to the positive sphere that is available after the implementation of the nuclear deal to enhance the level of economic and commercial cooperation, Sadeghi noted “removing banking barriers can encourage businessmen and further economic development pf the two countries.”

Sadeghi also emphasized the expansion of the tourism relation and scientific cooperation between Iranian and Indonesian universities.

Fadli Zon, for his part, referred to the scientific and industrial progress of the Islamic Republic of Iran during the imposed sanctions and said “resistance of the people of Iran in the years following the victory of the Islamic Revolution deserves respect and appreciation.”

Zon described Iran-Indonesia Parliamentary Friendship Group’s visit to Jakarta as fruitful and useful in enhancing the relations between the two countries.