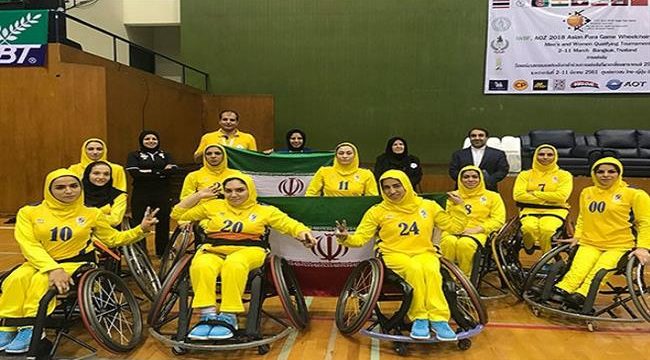 Press TV- The Iranian women’s national wheelchair basketball team has secured a quota place for the 2018 Asian Para Games, following an overwhelming victory over Afghanistan at the Asia and Oceania Qualification Tournament.

On Friday, the Iranian outfit defeated Afghanistan 40-23 in the Thai capital city of Bangkok in its fifth encounter at the international sports event.

The Iranian women’s national wheelchair basketball team overcame the Thai side 45-30 in its opening match on March 5, before routing the Indian outfit 74-4 in a one-sided fixture for its second emphatic win.

The Iranian physically-challenged athletes beat their Laotian and Cambodian counterparts 53-14 and 58-17 respectively in the next ties on Wednesday and Thursday.

The Iranian sportswomen will take on Thailand in the final match on Saturday, while Afghanistan will take on Cambodia in the third-place play-off.

Eight men’s teams and six women’s wheelchair basketball teams are competing at the Asia and Oceania Qualification Tournament for a place in the 2018 Asian Para Games.