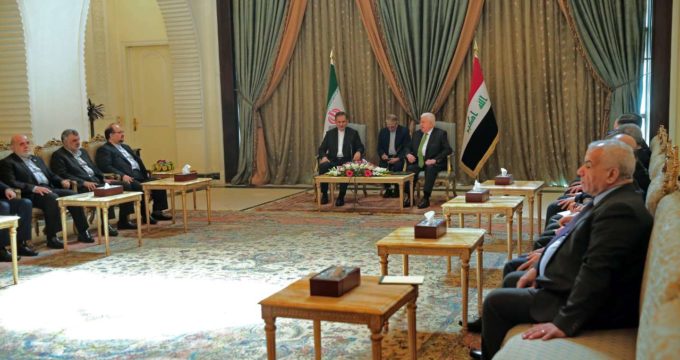 He also made a pilgrimage to holy cities of Karbala and Najaf on the third day of his visit.

Upon his arrival in Baghdad, Jahangiri told reporters he has traveled to Iraq to strengthen bilateral relations in all fields.

Talking to al-Abadi, Jahangiri stated that Iran is ready to open up to a $3 billion credit line for Iraq as part of the Islamic Republic’s contribution to Iraq reconstruction.

The Iraqi prime minister, for his part, voiced his country’s readiness to make the necessary efforts for resolving banking issues.

In a short press conference after meeting with Jahangiri, al-Abadi hailed Iran’s support to Iraq to overcome terrorism and liberate Iraqi territories from ISIL terrorist group.

In this brief press conference Jahangir once again reiterated Iran’s support to Iraq and Iran’s will to boost strategic cooperation with the country.

The Iranian VP  said geographical and historical commonalities urges us to strengthen the relations of the two countries.

Jahangiri in a meeting with Iraqi president stressed that the two countries need to expand their economic transactions to reach over $7 billion.

Iraqi president, for his part, thanked Iran for its support in the fight against ISIL and other terrorist groups, saying “today, we need Iran’s support and cooperation in reconstruction of our country.”

In the meeting, Iraqi parliament speaker noted that “the Islamic Republic of Iran has always stood alongside Iraq and the victories would not have been achieved without Iran’s help.”

Referring to upcoming elections in Iraq, Iran’s first vice president said “the Iraqi state is one of the democratic countries in the region whose government is elected by people, even though it is located in a region where people in some parts of it have been deprived of ballot boxes for electing or dismissing their officials.”