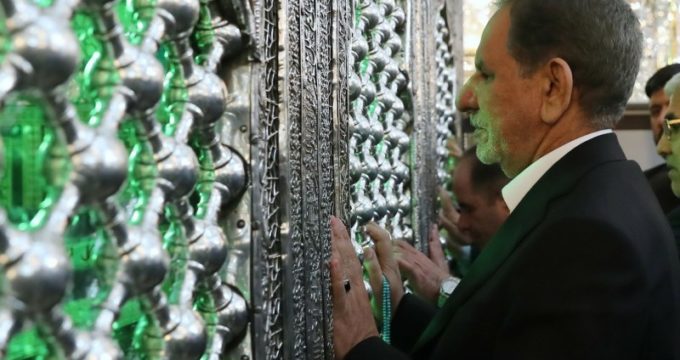 Iran veep pays tribute to Imam Hussein (AS) in Karbala

IRNA – Iranian First Vice President Es’haq Jahangiri made a pilgrimage to Holy Shrine of Imam Hussein (AS), the third Imam of Shiite Muslims and Aba Al-Fadhel Al-Abbas, the brother of the third Shia Imam in Karbala on Friday.

Jahangiri, who is on a three-day official visit to Iraq, left the sacred city of Najaf, which is home to holy shrine of First Shia Imam, Imam Ali (AS), for Karbala.

He arrived in Najaf late Thursday

Jahangiri, arrived in Iraq on Wednesday at the head of a high-ranking delegation comprising political and economic officials to help bolster bilateral ties and discuss regional developments with the country’s officials.

Iran’s Minister of Industry, Mine and Trade Mohammad Shariatmadari and Minister of Agricultural Jihad Mahmoud Hojjati are accompanying the First Vice-President in his visit to Iraq.