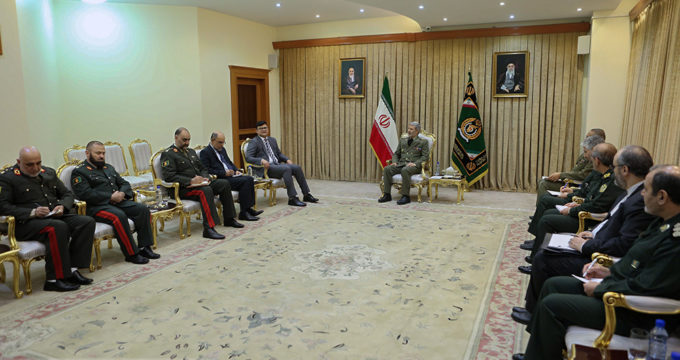 March 9, The Iran Project – This week, Tamim Assi, Afghanistan Deputy Minister of Defense for Policy and Strategy and his accompanying high-ranking military delegation have arrived in Tehran at the invitation of deputy commander of General Staff of Iranian Armed Forces for international affairs Brigadier General Qadir Nezami.

Talking to Assi, Nezami said that Afghans should resist US dominance in their motherland.

“The young generation of Afghans should not allow their homeland to get dominated by US, and they should rely on their own domestic potentials, instead” said Nezami.

“The armed forces of the Islamic Republic of Iran are enjoying deep military and security experience of the 8-year-long imposed war and also war on terror, and sharing this experience with Afghanistan can be one of the main areas of cooperation between the two countries,” reiterated Assi.

In a meeting with Assi, Ahadi expressed Iran’s readiness to transfer its experiences in the fight against terrorism to Afghanistan, declaring “we strongly support the peace process in Afghanistan,” stressing that Afghanistan should not become a battlefield for rivalry among powers.

Assi, for his part, expressed his hope that their visit will further strengthen the bilateral ties.

Speaking to Assi, Araghchi praised the Afghan president’s prudence in opening a new chapter in defense cooperation between the two countries.

For his part, the top Afghan official, said his trip to Tehran is aimed at preparing the ground for an upcoming visit to Iran by Afghanistan’s new defense minister next April and to open a new chapter in mutual cooperation in the defense sector.

In a meantime, Hatami said that Iran is ready to provide Afghanistan at the country’s official request with advisory and security assistance in combating terrorism.

For his part, the Afghan defense official stressed that Afghanistan considers the security of the Islamic Republic of Iran as its own, and expressed hope that the strategic document on cooperation between the two sides would be drafted and put into effect as soon as possible.