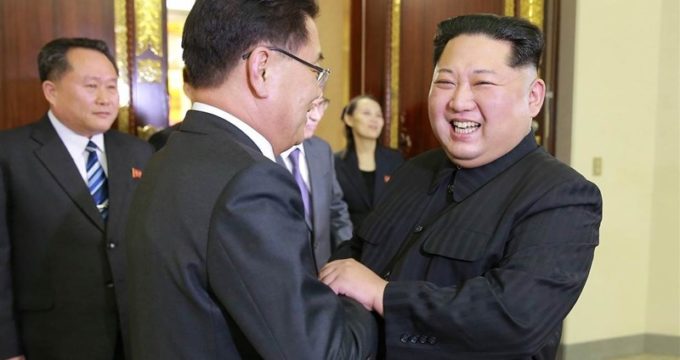 A 10-member South Korean delegation led by National Security Office head Chung Eui-yong traveled to the North Korean capital, Pyongyang, on Monday in hopes of encouraging North Korea and the United States to talk to one another.

“Hearing the intention of President Moon Jae In for a summit from the special envoy of the south side, (Kim Jong Un) exchanged views and made a satisfactory agreement,” the North’s Korean Central News Agency (KCNA) said of the meeting, according to Reuters.

The agency did not provide details on what that agreement was but an official from the presidential Blue House in Seoul said it partially addressed the summit offer made by the North.

The delegation will wrap up a two-day trip to Pyongyang later on Tuesday after another meeting with North Korean officials, the spokesman said.

Blue House officials could not confirm whether Kim Jong Un would be present at Tuesday’s meeting.

Chung said in Seoul before leaving on Monday his team would deliver the South Korean president’s wish to bring about denuclearization of the Korean peninsula and permanent peace.

Kim Jong Un gave orders for “practical steps” regarding the letter from Moon that was delivered to him by the delegation, KCNA said without elaborating.

“He also made an exchange of in-depth views on the issues for easing the acute military tensions on the Korean Peninsula and activating the versatile dialogue, contact, cooperation and exchange,” the report said.

Washington and Pyongyang have been at loggerheads for months over the North’s nuclear and missile programs, with US President Donald Trump and Kim Jong Un trading insults and threatening war.

Recently, Trump said his administration will sit down for negotiations with North Korea only if Pyongyang agrees to eliminate its nuclear arsenal.