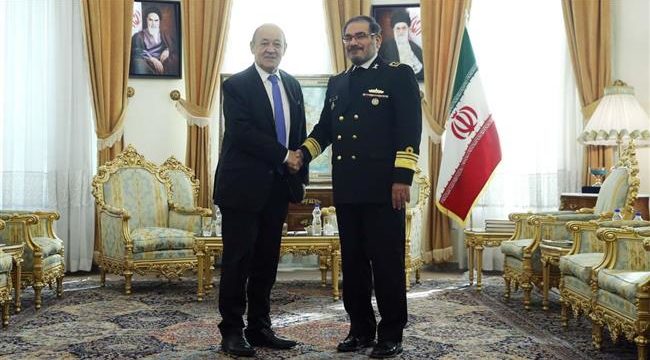 Le Drian also attends the opening ceremony of “The Louvre in Tehran” exhibition at National Museum of Iran.

Meanwhile, Shamkhani and French FM discussed discussed a host of issues in areas of bilateral ties and regional and international developments.

“European policy in giving in advantages to US to keep the Americans inside the nuclear agreement is a wrong policy and means inactivity and surrendering to Trump’s psychological warfare,” noted the Iranian Leader’s senior advisor.

French FM, for his part, hailed the active approach of the Islamic Republic of Iran in dealing with the landmark nuclear deal and fully delivering on its commitments.

Besides, the Iranian and French FMs discussed issues of mutual interest and a wide range of topics of including bilateral relations, the implementation of the JCPOA, US violation of the articles of the nuclear deal, and regional issues, especially Syria and Yemen.

Referring to the principle based stances of France and Europe towards the JCPOA, Zarif lashed out at some of the European officials’ behaviors and stances in regards with the nuclear agreement of 2015, between Iran and Sextet. He also criticized Europeans for being under the influence of US.

In a meantime, President Rouhani told French FM that all sides would come to regret it if the nuclear deal was breached, adding that Iran is prepared to deal with any unsavory situation regarding the agreement.

Rouhani highlighted the need for Iran and France to cooperate on regional stability and security, adding “France and the Islamic Republic of Iran have played a positive role in solving the recent issues in Lebanon and should continue to work in the direction of strengthening peace in this country and providing the necessary groundwork for an election that will bring about vitality and political solidity in Lebanon.”

“We are interested in consulting and cooperating with Iran as a friend country on all issues of mutual interest,” the French foreign minister stressed.

Addressing the “The Louvre in Tehran” exhibition, the French FM said that cultural exchanges will help deepen and broaden relations and cooperation between Tehran and Paris and such cooperation has increased dramatically in the contemporary century.