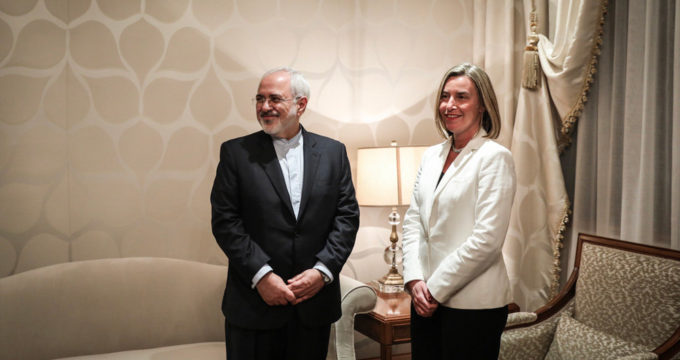 Iran-EU talks: Initiative for peace or withdrawal in Trump’s favour?

IFP – Reports say that some European countries have already begun their talks with Tehran to reach what US President Donald Trump has forced them to achieve.

While the US is in many ways trying not to meet its commitments under the Iran nuclear deal, it has reportedly asked its European allies to put pressure on Tehran to come at a table to renegotiate the accord, and also hold talks on some other issues including the country’s role in the region and its missile program.

Although the Islamic Republic has repeatedly and categorically rejected such proposals, reports indicate that certain European countries have already begun their talks with Tehran to reach what US President Donald Trump has forced them to achieve. It is said that the second round of these talks are slated to be held in the Italian capital Rome later this month.

E’temad daily in a Farsi piece by Sara Masoumi has looked into this issue. The main parts of this article are translated as follows:

“Regional talks between Iran and Europe have begun.” A news story, which both the facts on the ground as well as Reuters News Agency confirm it. Reuters has released some of its details too. In such a situation, it seems that the European troika has opened up a channel for talks on non-nuclear issues, along with ongoing consultations with Iran on the JCPOA.

When Iran and the P5+1 began the nuclear talks and concluded them with an achievement called the Joint Comprehensive Plan of Action (JCPOA), the international community was optimist enough to suggest that Tehran and the P5+1 could soon engage in dialogues and even negotiate on regional issues. While the crises in the region are deepening from Yemen to Syria, etc., the dialogue between Iran as an influential player and the EU as an international body has become a necessity. However, the unending shenanigans of the President of the United States over the nuclear deal actually have prevented a positive prospect for initiation of regional consultations between Iran and Europe.

First in Munich, Then in Rome

According to a report released by Reuters, Iran and the European powers, on the sidelines of the Munich Security Summit, which was recently held in Germany, engaged in the dialogues on the regional issues. The report say the second round of these talks is scheduled to be held in Italy this month (March). Reuters has explicitly linked these talks with Europeans’ efforts to meet the Trump’s conditions to stay in the nuclear deal.

Donald Tramp warned in January that he waives Iran’s nuclear sanctions for the last time, and that the only way to keep the United States in the deal is that the EU meets Washington’s demands regarding the JCPOA. Reuters has also claimed that the three European powers, joined by Italy and the European Union, have initiated discussions with Iran to address regional issues. It has added that issues related to Persian Gulf states and Iran’s role in Syria, Lebanon, Yemen and Iraq are on the agenda. Reuters further has claimed that senior Iranian officials have held a first meeting on the sidelines of last month’s Munich Security Conference, focusing on Iran’s role in the Yemen conflict. This could refer to the negotiations of Iran’s Deputy Foreign Minister Seyyed Abbas Araqchi with the delegates of the European countries in Munich.

“In Munich we laid out what was expected from them in Yemen. They obviously said it wasn’t them, but we drew some conclusions to move forward together. The Iranians are pretty co-operative, but having a positive meeting doesn’t mean we’ll see any sort of impact in the real world,” said a senior European diplomat. Another European official has told Reuters that Iran and Europe will discuss the presence of Iran in southern Lebanon and southern Syria in the next round of talks in Italy.

All this comes at a time that Russia vetoed an, “antagonizing” draft resolution submitted by the UK that also drew criticism from China. The UK had proposed to include a provision that would call out Iran for allegedly violating an arms embargo on Yemen, imposed at the onset of its civil war in 2015. Instead, the UN Security Council unanimously adopted a Russia-tabled draft. In such a situation, it seems that Europe’s talks with Tehran over regional issues is not seeking a tangible solution for the region’s crises, and only tries to run a show for Washington by putting pressure on Tehran.

Although The New York Times reported last week that the Europeans have agreed with Donald Trump’s conditions regarding the JCPOA, it seems that the main dispute between Europe and the US is that Trump says the provisions must have no expiration date.

This comes as Iran has denied any re-negotiation of the details of the nuclear deal, and has explicitly stated that Tehran will ask for further concessions if any re-negotiations are going to take place. Some analysts say the French President Emmanuel Macron is scheduled to meet with Donald Trump on April 24 to discuss with him the need for the US to remain in this agreement, and the outcome of those talks may determine whether Washington waives Iran sanctions on May 12 or not.

The Europeans and the United States will hold meeting in mid-March over the nuclear deal, regional issues and Iran’s missile tests. At the same time, as Fars News Agency said in a Farsi report, inside the United States, legislators are also working on drafting bills to expand the scope of sanctions against Tehran. On March 1, House Foreign Affairs Committee Chairman Ed Royce and Ranking Member Eliot Engel introduced a bill to target Iran’s Islamic Revolution Guards Corps. Notably, the bipartisan bill authorizes the administration to sanction entities in which the IRGC has an ownership stake of less than 50 percent, significantly raising the stakes for anyone doing business with the IRGC. The bill makes public opposition as well to “Iran’s membership in the World Trade Organization so long as Iran remains a state sponsor of terror.”