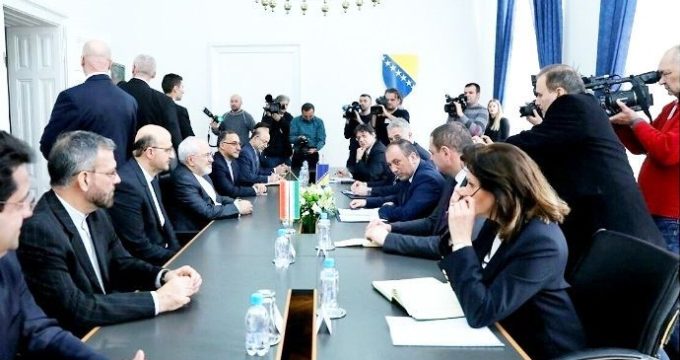 Zarif in Sarajevo on last leg of his tour of Eastern Europe, Balkans

March 3, The Iran Project – Foreign Minister Mohammad Javad Zarif, heading a politico-economic delegation, arrived in Sarajevo, the capital city of Bosnia-Herzegovina late Thursday (March. 1) on the last leg of his tour of Eastern Europe and Balkans.

In a meeting with Iranians living in Bosnia and Herzegovina, the Iranian foreign minister urges Muslims to repel extremism, adding extremists are not Muslim.

“I remember more than 24 years ago, when I was honored to visit Sarajevo in the final days of the Bosnian War, I saw a war-torn city that had seen and resisted violence and mass killing. Today, I am happy to see that Sarajevo has passed that bitter legacy of war and entered the stage of construction and a peaceful life,” Iranian foreign minister Mohammad Javad Zarif said in a meeting with Iranians living in Bosnia and Herzegovina on Thursday evening.

Talking to Zarif, Begovic said the political and cultural relations between the two sides are now standing at an ideal level, but the economic ties have not yet developed at the same pace over the past years.

For his part, the Iranian foreign minister said Tehran attaches great importance to all ethnic groups in Bosnia and Herzegovina.

Meanwhile, the two foreign ministers reviewed the latest developments in relations between the two countries in the political, economic and cultural fields and emphasized the deepening of bilateral relations in all fields and levels.

Furthermore, the foreign ministers stressed necessity of combating terrorists and extremists as a common threat to all regions of the world, emphasizing the cooperation between the two countries in that regard.

In a meantime, Zarif and Sarovic discussed ways of expanding economic and trade relations, creating facilities and removing barriers on the way of bilateral relations.

After the meeting the two ministers attended a joint conference on trade relations in Sarajevo attended by two sides’ businessmen and entrepreneurs.

Eventually, Iran’s foreign minister arrived back in Tehran on Saturday (March. 3) after visiting Serbia, Bulgaria, Croatia, and Bosnia on his 5-day visit to East Europe and Balkans region.

While still in Sarajevo, Zarif in a tweet wrote “after successful visits to Belgrade, Sofia and Zagreb, in Sarajevo today and pleased to be able to commit to strengthening our deep ties with all Bosnians. Thanking BiH leaders for affirming that the people of Bosnia and Herzegovina will never forget Iran’s long standing support.”