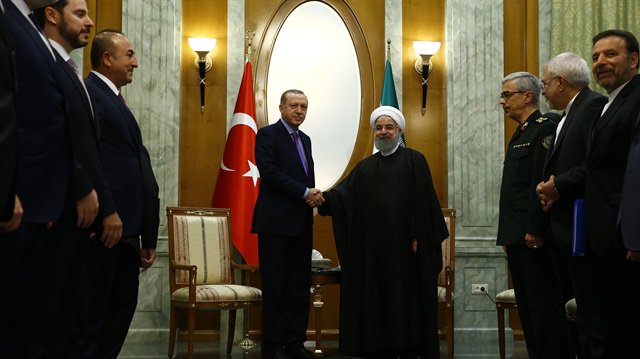 Al Monitor | Mehmet Cetingulec: After a four-year downturn, trade between Turkey and Iran rose in 2017, as the two neighbors began collaborating in Syria. Judging by figures from the past five years, the political climate between Ankara and Tehran seems to directly affect commercial ties. Their bilateral trade volume contracted during periods when Turkey’s Middle East policies led to closer cooperation with Saudi Arabia and deeper differences with Iran, but perked up in 2017, when the two countries engaged in joint efforts in Syria.

Trade volume between Turkey and Iran reached an all-time high in 2012, totaling $21.9 billion. In 2013, it fell sharply, to $14.5 billion, under the impact of US sanctions on Iran. The decline continued in 2014, down to $13.7 billion. In a bid to prop up commercial ties, the two countries enacted a preferential trade agreement at the start of 2015, cutting tariffs on hundreds of products. A target was set of $35 billion in annual bilateral trade.

The nuclear agreement Iran signed with the world powers soon led to the lifting of sanctions, fueling hope that no major obstacles remained to the desired boom in bilateral trade. Yet despite positive developments, trade volume slumped to $9.7 billion in 2015 and then to $9.6 billion in 2016. The worsening figures were a clear sign that commercial ties would fail to take off unless the two countries resolved areas of conflict in their regional policies, chief among them the crisis in Syria.

Things began to change in 2017, as Turkey came to loggerheads with the United States in Syria and engaged in efforts with Russia and Iran toward a resolution to the conflict. A significant factor bringing Ankara and Tehran closer has been a shared concern that their countries could be next in line for trouble stemming from the regional upheaval, with the Kurdish problem growing more complicated for both of them.