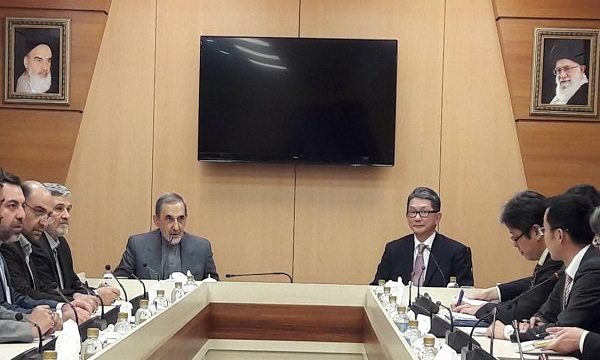 “Iran is ready to expand relations with Japan in various fields, and it is welcomed,” said Iranian Leader’s Senior Advisor Ali Akbar Velayati.

The Iranian Leader’s top aide on international affairs made the remarks on Saturday while meeting with Japanese Senior Deputy Minister for Foreign Affairs Takeo Mori in Tehran.

“Japan has a special significance and status for the Islamic Republic of Iran,” highlighted the Iranian official who also chairs the Azad University’s board of trustees.

“It is hoped that this visit will be a constructive and valuable journey with favorable achievements in line with expansion of cooperation between the two sides,” added Mr. Velayati who is also the Head of Strategic Research Center of Iranian Expediency Council.

In addition to describing the bilateral relations between Iran and Japan as positive, he called for expansion and development of ties. “The Islamic Republic of Iran was interested in developing relations with Japan,” reiterated the Iranian veteran diplomat who acted as Iran’s foreign ministry for 16 years between 1981 and 1997.

“You know that the Iranian people have good memories of the Japanese people, and Japan is an important country for Iran, and because of this, it has an important place,” he said, referring to his former meetings with Japan’s foreign minister and Shinzo Abe and other officials.

The Japanese diplomat, in this meeting, for his part, thanked the Iranian officials for paving the ground for his visit and voiced his country’s readiness ti develop ties with the Islamic Republic of Iran.

In this visit to Tehran we are after consultations with the Islamic Republic of Iran to increase the level of cooperation in the economic and technical fields,” said Mr. Mori.