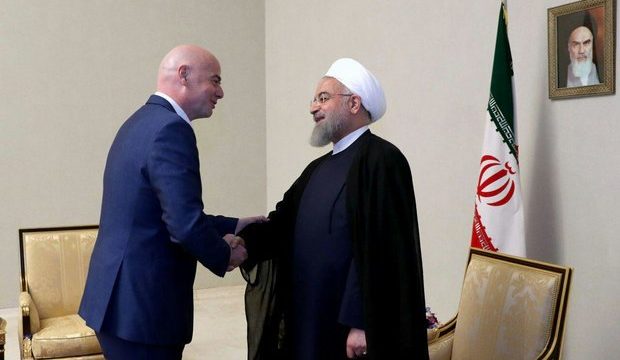 VOA – The head of football’s world governing body, FIFA, says Iran has assured him that it will “soon” allow women to attend men’s football matches in the country.

FIFA president Gianni Infantino was speaking Friday at a FIFA equality conference in Zurich, a day after his attendance at a men-only football match in Tehran prompted criticism from rights activists.

Infantino, who also met with Iranian leaders including President Hassan Rouhani Thursday in the capital, said he was “promised” that Iranian women soon will have access to football stadiums. He did not specify who gave him that promise.

Iran has been barring women from attending some men’s sporting events, especially football, since the first few years after its 1979 Islamic Revolution.

The reports quoted Iranian interior ministry spokesman Sayyed Salman Samani as saying the women were not arrested, but rather “transferred” to a “proper place” and released at the end of the game.

Esteghlal went on to beat Persepolis 1-0 in front of a capacity crowd of around 100,000 men at the stadium. Infantino and FIFA technical director Marco Van Basten were among them.

Infantino and Van Basten were in Iran to celebrate the 100th anniversary of Iran’s football federation.

Article 4 of FIFA’s statutes says discrimination of any kind against a group of people because of gender is “strictly prohibited and punishable by suspension or expulsion.”

Infantino’s presence at Azadi Stadium drew sharp criticism from human rights activists who accuse Iran of violating FIFA rules by banning women from men’s matches. Geneva-based activist Hillel Neuer tweeted at FIFA, asking why it was “silent” on the matter.

Iranian women’s rights activists said they had hoped Infantino’s visit to the stadium would be an opportunity for female football fans to bring their complaints about the ban to his attention.

In a statement emailed to VOA Persian Friday, FIFA said it is “strongly committed to promoting the protection of human rights including especially the right of women to attend football matches.”

FIFA said it was “very concerned” to learn about Thursday’s “deeply regrettable incidents” involving the women who were detained at Azadi Stadium. It said the organization has asked Iranian authorities for more information on the matter and will continue to follow it closely.

FIFA also said Infantino told Iranian President Rouhani that it is important for “all football fans irrespective of gender” to be allowed to cheer and support their favorite teams inside stadiums, especially in a country like Iran, where it said the “whole population is so passionate about football.”

Rouhani’s official website quoted him as telling Infantino that Iran “always has tried to provide more and more access to sport.”

It said Rouhani also referred to the “passionate presence of women in various fields of sport, especially football,” noting that 23,000 Iranian women are registered as football players in the country.

In an interview with VOA Persian Thursday, Brussels-based Iranian activist Darya Safai said Iranian women have been trying to get into football stadiums for years, sometimes disguising themselves with facial hair to look like men. Safai is the founder of “Let Iranian women enter their stadiums,” a campaign to end gender discrimination at Iranian sporting venues.

Safai said the women detained at Azadi Stadium Thursday were trying to watch the match with their male family members, a right that women had before the Iranian Revolution. “I hope that Iranian men, as they have done before, will stand together with women to help them to get their rights back,” she said.

Iranian women have been allowed to attend some men’s sporting events. Women were among the fans who watched the Iranian men’s national basketball team face Iraq on Sunday in a FIBA Basketball World Cup 2019 Asian Qualifier at the Azadi Indoor Stadium, adjacent to the outdoor football arena. They were seated in a separate section from the male fans.

Ayatollah Naser Makarem Shirazi, a prominent Iranian religious leader, has been one of the strongest supporters of banning women from sporting venues. News site IranWire quoted him last December as telling students during a lecture that the presence of women in stadiums “inevitably” leads to morally corrupt acts.

In phone calls from Iran to VOA Persian’s Straight Talk show Thursday, one man said that if women went to football stadiums, they would find their dignity violated by men shouting foul language and acting aggressively.

But other male callers supported efforts to end the football stadium ban, suggesting that men should insist on entering matches with their wives or daughters, or stop buying tickets altogether in protest.

One female caller said she sees irony in Azadi Stadium’s name, whose English translation is “freedom.”

“Isn’t it interesting that half of the people in the country are not allowed to go to a venue called ‘Azadi,’” she said.