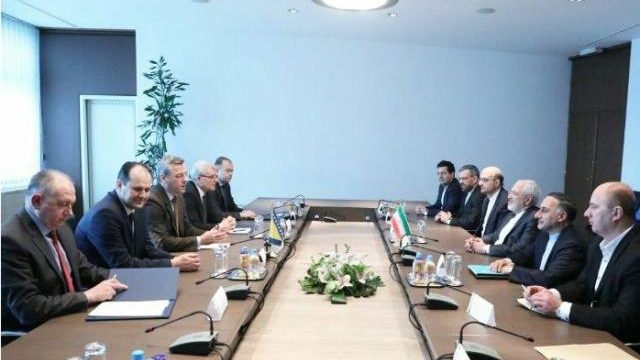 IRNA – Foreign Minister Mohammad Javad Zarif in a meeting with Chairman of Parliamentary Assembly of Bosnia and Herzegovina Ognjen Tadic described his visit to the country as fruitful, saying that tradesman of the two countries had good meetings during his stay.

Zarif conveyed warm greetings of Iranian Majlis Speaker Ali Larijani to his Bosnian counterpart, saying, ‘We are keen on continued stability and friendship in Bosnia-Herzegovina and favor cooperation among all ethnic groups in the country.’

Noting that the two nations’ political and cultural ties are firm and strong, Zarif added, ‘We are ready to promote ties in all fields, as we have no limitations in this respect.’

Tadic, for his part, recalled his visit to Tehran in 2016 saying that he felt Iranian nation’s friendship with the Bosnian nation during the trip to Tehran.

Regional and international developments as well as the need for all-out fight against terrorism and extremism and bolstering parliamentary collaboration and economic relations were among the topics discussed during the meeting.

The Iranian minister, heading a politico-economic delegation, left Tehran for a visit to four Eastern European countries on Monday.

Zarif after visiting Serbia, Bulgaria and Croatia arrived in Sarajevo on Thursday on the last leg of his tour of Balkans and Eastern Europe.

A high-ranking trade delegation comprising economic activists and entrepreneurs from private and public sectors are accompanying Zarif during his four-nation tour.