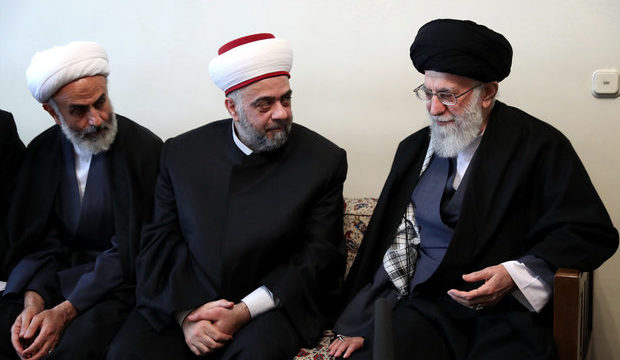 In a meeting in Tehran on Thursday with Syrian Awqaf (Religious Endowments) Minister Mohammad Abdul-Sattar al-Sayyed and a number of the Arab country’s clerics, Ayatollah Khamenei said Syria is at the front line of the battle against Islam’s enemies and reiterated the Islamic Republic’s support for the country.

“Syria is at the front line today, so it is our duty to support the Syrian resistance” the Leader said, adding, “Of course, Mr. Bashar Assad presented himself as a great fighter and resisted steadfastly and without hesitation, which is very important to a nation.”

Elsewhere, Ayatollah Khamenei highlighted the importance of unity among Muslims and said, “…Our duty is to protect and defend Islam and the Islamic movement, so we must set aside the differences and ignore those who move and act against the unity if they are not linked to the policies of the global arrogance.”

The Syrian minister, for his part, conveyed Assad’s greetings to the Leader and said Damascus is grateful to Tehran for its powerful stance in support of Syria and its fight against Zionist-Takfiri terrorism.

The Islamic Republic of Iran has extended the line of resistance against bullying powers from Tehran to Damascus and Lebanon, Sayyed said.

Iran has remained an ally of Syria in the war against foreign-backed militancy since the start of civil war in the Arab country’s civil war in 2011.

Iran’s timely support for both Syria and Iraq was instrumental in the two Arab countries’ victory over Daesh (ISIL or ISIS) and ending the terrorist group’s self-proclaimed caliphate.