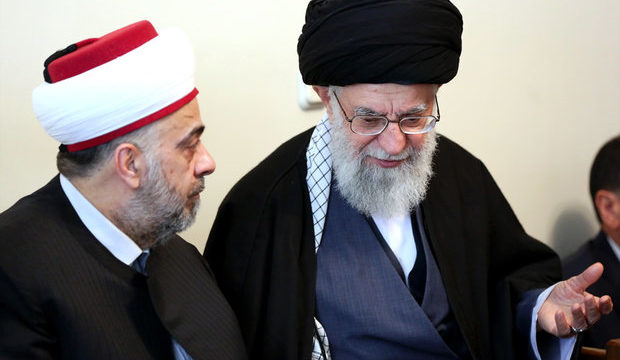 Syria on frontline of fight against enemies of Islam: Ayatollah Khamenei

Press TV- Leader of the Islamic Revolution Ayatollah Seyyed Ali Khamenei says Syria is on the frontline of the fight against the enemies of Islam.

“Syria today is on the frontline, so our duty is to support the Syrian resistance,” Ayatollah Khamenei told Syrian Minister of Religious Endowments (Awqaf) Mohammad Abdul-Sattar al-Sayyed in Tehran on Thursday.

Noting that “the abasement of some nations derives from the abasement of their leaders,” Ayatollah Khamenei said, “The enemy cannot do anything against a dignified nation whose leaders proudly feel dignity in Islam and in their identity.”

The Leader went on to say, “The durability of the revolution of the Iranian nation showed that what the US, Europe and the world’s nuclear powers want is not necessarily realizable.”

“If all of us and the elements of the resistance front in the region remain firm, the enemies cannot do anything.”

Ayatollah Khamenei also stressed that the Muslim Ummah is obliged to adopt a decisive countermeasure against attempts by arrogant powers and Saudi Arabia, which are aimed at sowing rifts among them.

“We do not accept a Shia who is backed by London and a Sunni who is supported by the US and Israel, because Islam is opposed to infidelity, oppression and arrogance,” he added.

The Syrian minister, for his part, said the Islamic Republic of Iran has extended the resistance front against the bullying powers from Tehran to Damascus and Lebanon.

“This has created an important obligation for usو because we have to plan for the liberation of al-Quds as a single entity,” he said.

At the request of Damascus, Iran has been providing military advisory support to Syrian government forces who are fighting different Takfiri terrorist groups.