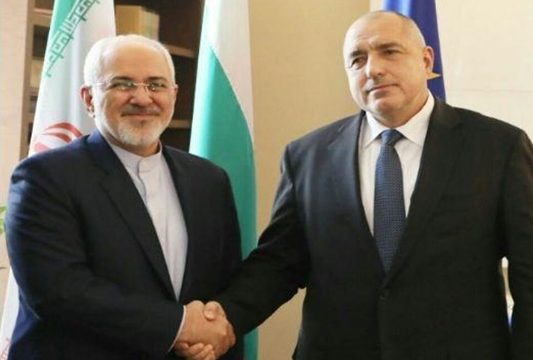 In a meeting with Zarif, Bulgarian president deemed Iran as a “highly significant” country in the region, and congratulated the top diplomat on his efforts toward the signing of the landmark nuclear deal and the removal of anti-Iranian sanctions.

The Iranian FM, for his part, extended President Hassan Rouhani’s invitation to Radev for an official visit to Iran, adding “improving the condition of transit routes and corridors is also of high importance to us. We are glad that in the last year alone, we exchanged 21 delegations between the two sides, the majority of which were economic.”

In a meantime, Zarif and Bulgarian FM exchanged views on the ways to implement mutual brokered agreements and put the memoranda of understanding into practice.

Moreover, Zarif and Bulgarian speaker hailed the historical relations between Iran and Bulgaria and called for further expansion of ties.

Karayancheva referred to the history of relations between Iran and Bulgaria and strongly supported the expansion of bilateral relations in all areas.

Zarif, for his part, noted the agreements reached at the meetings with Bulgarian officials and added, “We are glad that the two countries’ relations are in the right direction, and we will see a further boom in relations between the two countries in the near future.”

Talking to Bulgarian PM, Zarif said Bulgaria’s role as a friend and the rotating head of the EU is very important for Iran, describing the country as a gateway to Europe.

Zarif said in the meeting that Iran and Bulgaria can increase their commercial relations up to one billion dollars.

A high-ranking trade delegation comprising economic activists and entrepreneurs from private and public sectors are accompanying Zarif during his tour of Balkan and Eastern European states.

Zarif Left Sofia for Zagreb on the third leg of his tour of Balkans and Eastern Europe which will also take him to Bosnia-Herzegovina.