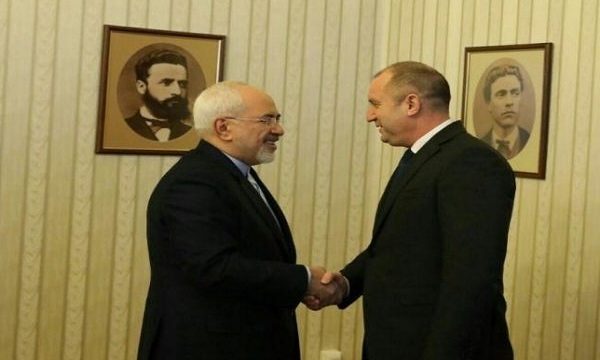 During the meeting, the Bulgarian president deemed Iran a “highly significant” country in the region, and congratulated Zarif on his efforts toward the signing of the landmark nuclear deal and the removal of anti-Iranian sanctions.

“Boosting economic ties with Iran is one of our top priorities, and to this end, we need to remove all obstacles to trade transactions and improve the state of transit routes, such as the Black Sea corridor to the Persian Gulf,” President Radev said.

He went on to highlight Iran’s major contributions in the region, and voiced support and appreciation for the Islamic Republic’s constructive role toward the establishment of peace and stability in the Middle East region fraught with tension and conflict.

He further called for development of ties between Iran and Bulgaria in cultural cooperation and tourism.

Zarif, for his part, extended President Rouhani’s invitation to President Radev for an official visit to Iran, adding “improving the condition of transit routes and corridors is also of high importance to us. We are glad that in the last year alone, we exchanged 21 delegations between the two sides, the majority of which were economic.”

The Iranian diplomat then called for facilitation of banking cooperation as a major step toward removing obstacles to the two side’s expansion of economic ties.

Noting the accompanying economic delegation during his Eastern European tour, Zarif expressed hope that the joint trade forum between Iran and Bulgaria would pave the way for further cooperation. He added that eight Iranian provinces have trade and economic cooperation with Bulgaria.

Thanking Bulgaria for its support for the Iran nuclear deal, Zarif said “we believe that the JCPOA is a great achievement in diplomacy, and Europe played a considerable part in bringing it into fruition. All ten reports of the IAEA confirm Iran’s full committment to the nuclear deal, while the US is still making efforts to undermine the agreement.”

Zarif then underscored Iran’s constructive role in the fight against terrorism and extremism in the region, adding “we have always been countering terrorist groups in the region, whereas certain regional countries continue to back the terrorists.”

The two sides also conferred on regional developments, including Yemeni and Syrian crises, and Iran’s efforts for putting an end to these conflicts.