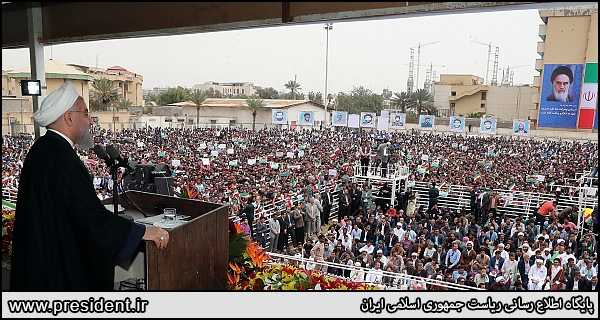 Press TV- Iran’s President Hassan Rouhani has called on the Western countries to stop providing Saudi Arabia with weapons of mass destruction (WMDs) for the sake of Yemeni people, who have been suffering under Riyadh’s bloody attacks and siege.

Rouhani made the remarks in an address to a large crowd of people in the southern port city of Bandar Abbas in Hormozgan Province on Wednesday.

The comments came two days after Russia vetoed a British-drafted resolution at the United Nations Security Council (UNSC) that seemed more to target Iran rather than address the Yemen crisis. The failed document called for “additional measures” against Iran over accusations that it violated the 2015 arms embargo on Yemen.

Rouhani further hailed the “prudent and rightful” positions taken by Russia and some others at the UNSC, denouncing the hostile stance taken by the UK and the US during that session.

The US sought a condemnation of Iran at the Security Council over the issue of Yemen, but it “was once again left alone,” he added.

The president said those who “have sympathy for the Yemeni people” should put pressure on the aggressors and facilitate the delivery of food and medicine to civilians in the Arab state.

The US, Rouhani said, has made three attempts over the past months to advance its plots against Iran, but in vain.

“Such plots will lead nowhere until the Iranian people are united and standing side by side in solidarity,” Rouhani stressed.

Saudi Arabia and its allies launched the war on Yemen in March 2015. The military campaign, which is accompanied by a land, aerial and naval blockade of Yemen, has so far killed more than 13,600 people and led to a humanitarian crisis.

Several Western countries, the US and the UK in particular, have been complicit in the Saudi-led aggression on Yemen as they supply the Riyadh regime with advanced weapons and military equipment.