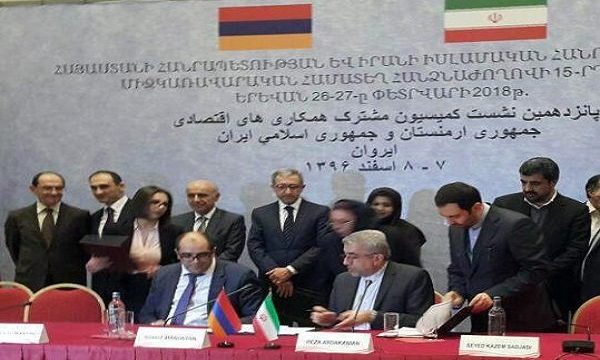 Talking to Iranian minister, Karapetyan said that efforts should be made to promote the two countries’ economic ties proportionate to political relations.

He further noted that Joint Cooperation Commission can prepare the ground for promotion of mutual economic collaboration.

Ardekanian, for his part, pointed to longstanding ties between the two countries, hoping that holding the 15th session of Joint Cooperation Commission would help bolster economic relations.

Addressing the meeting of two countries’ joint economic commission in Yerevan which was also attended by Armenian Minister of Energy Infrastructure and Natural Resources Ashot Manukyan, Ardekanian said suitable measures have been taken for setting up the third power transmission line from Iran to Armenia and the line is expected to come on stream by the end of 2019.

Iran attaches great importance to Armenia and wants to see the development and progress of this country in international level, he said, adding, “the two sides have taken effective measures in order to broaden and enhance bilateral ties in all fields.”

Also, four cooperation agreements in the fields of economy, customs and sports were inked at the closing ceremony of the meeting.

Talking in the same gathering, Head of Export Promotion and Logistics at the Ministry of Energy Hamid Reza Tashayoei underlined the need for pursuing agreements already signed by the two countries.

The Armenian prime minister visited Iran in October and major agreements were reached during his stay in Tehran, he said, complaining that existing capabilities are not used for continuing bilateral cooperation.