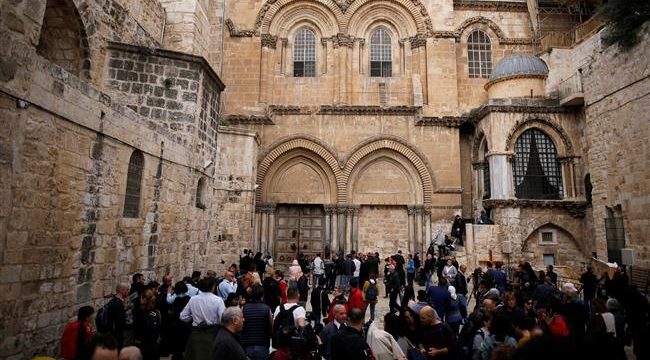 Press TV – In a rare move, church leaders in Palestine have closed the Church of the Holy Sepulchre in the Old City of Jerusalem al-Quds to express dissent against new Israeli tax measures and a proposed property law which they say is an attack on Christians in the Holy Land.

In a press conference in front of the old church, built where Christians believe Jesus was crucified, buried and resurrected, Theophilos III, the Patriarch of Jerusalem, Francesco Patton, the Custos of the Holy Land, and Nourhan Manougian, the Armenian Patriarch of Jerusalem, announced the closure in a joint statement on Sunday.

“As a measure of protest, we decided to take this unprecedented step of closure of the Church of the Holy Sepulchre,” the church leaders said in the statement, which was read out in front of the large wooden doors of the building. The statement added that the closure, which began at around noon (1000 GMT), would continue until further notice.

Recently, the municipality of Jerusalem al-Quds canceled a tax exemption it had granted to church-owned commercial property in the city, which in part made the christian officials shut the iconic church in protest.

“This reminds us all of laws of a similar nature which were enacted against the Jews during dark periods in Europe,” the church leaders said, adding the measure would harm their work, which includes not only religious but also social services to those in need.

Furthermore, Israeli lawmakers have proposed a bill that would allow the regime to expropriate land in Jerusalem al-Quds sold by churches to private real estate companies in recent years.

Church officials, however, say such a law would make it more difficult for them to find buyers for church-owned land-sales that contribute to operating costs of their religious institutions.

“This abhorrent bill … if approved, would make the expropriation of the lands of churches possible,” said the statement.

Outside the Church of the Holy Sepulchre, puzzled pilgrims and tourists voiced disappointment at finding its doors shut.

Meanwhile, Saeb Erekat, the secretary general of the Palestine Liberation Organization (PLO), said the move “should be a reminder of the need to end the Israeli occupation.”