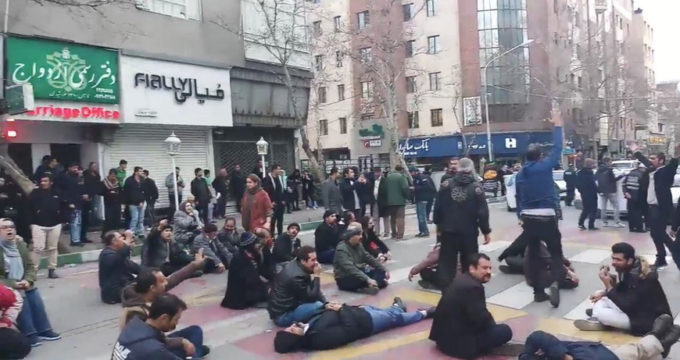 February 26, The Iran Project – So far, several top Iranian officials have strongly denounced the use of violence against the country’s police force, reacting to the deaths of five security forces at the hands of the member of a Dervish cult on Pasdaran street in north of Tehran.

The attacks took place overnight on Monday (Feb. 19) during an unauthorized gathering by the so-called Gonabadi Dervishes near a police station, during which they engaged in clashes with ordinary people and police forces, according to officials.

During the clashes, an attacker ploughed a bus through a group of policemen, killing three of them.

Ashtari said people from all walks of life condemned the Daesh-like behavior of rioters in northern Tehran, stressing that the judiciary system will soon put the rioters on trial.

Meanwhile, Rahimi, said that the rioters of Pasdaran Street were puppeteered by foreign hands and foreign-based anti-Establishment terrorists.

“We have the most severe punishment for the bus driver and the Samand sedan driver who killed these martyrs and the judiciary is at the same time pursuing the same goal,” reassured the official.

Besides, Mohseni Ejei, said that the prime suspect of the Dervishes case in Tehran will face trial as early as possible.

Mohseni Ejei stated that the people have legitimate demands calling on the Judiciary to immediately bring into justice those who have jeopardized the social security.

Tabandeh, leader of Gonabadi Dervishes, in a statement on Wednesday strongly condemned actions of some rioters, calling for prosecution of those involved in the incident.

The statement read “In recent days, bitter incidents took place around my residence in defiance of religious and mystic principles under false excuses …. that made me sad. Negligence, wrong judgment and failure to abide by my direct orders and advice on the part of some dervishes caused the incidents which we do not verify at all. We condemn such behaviors.”

More than 300 people, among them the drivers of the bus and the car as well as the main elements behind the incident, had been arrested.