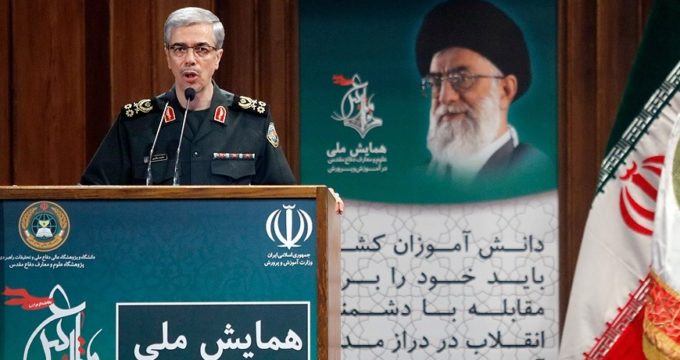 Terrorists should be wiped off Syria: Iranian General

IRNA – The Syrian territory, within next months, should be cleansed of terrorists, Chief of Staff for the Armed Forces of the Islamic Republic of Iran said on Sunday.

‘The entire Syrian territory should be cleansed of the terrorists within the next months,’ Major General Mohammad Baqeri told reporters at a local meeting, answering a question on the proposal for establoshing a 30-day ceasefire in the war-torn country.

‘This time again, there are parties who are not after establishment of peace and security in the country and faced with the Syrian army’s new campaign to cleanse the regions surrounding Damascus of terrorists, they have called for a ceasefire,’ General Baqeri said.

‘They want to reinforce terrorists under the proposed ceasefire plan,’ he added.

He said that the terrorists have used regions surrounding the Syrian capital to shell the city.

‘The terrorists have fired 1200 shrapnel into Damascus causing a large number of civilian injuries and death,’ General Baqeri said.

Despite the insistence by the Western countries and their terrorist proxies to establish ceasefire in Syria, Damascus and its supporters, including Iran and Russia, embarked on a joint venture to modify the ceasefire resolution, the Iranian General said.

‘The fight against notorious terrorist groups like the al Nusra Front will continue, while security zones will be established in the areas surrounding Damascus for the people to continue their lives,’ he added.