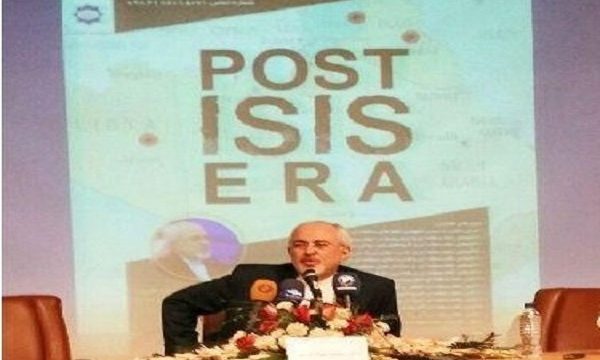 IRNA – Iran has done a great deal to fight Daesh that threatens the security of the world, said Iranian foreign minister on Saturday.

‘The danger of extremism and Daesh (ISIS) still threatens the world; the need for planning a long-term basic combat against the danger in the cultural field and against extremist ideology and also the cooperation and dialog between the countries of the region is clearly seen,’ said Mohammad Javad Zarif on the sidelines of the conference Patterns of Regional Orders in Post ISIS Era.

Zarif hoped that Iran, as a pioneer in fighting Daesh and extremism, will continue to play an influential role in fighting extremism and expanding the culture of dialog and cooperation in the Persian Gulf region.

‘The annual conferences of Iranian World Studies Association which are held with the cooperation of Tehran University, Faculty of World Studies seeks to survey the important political, social and cultural developments in global era as well as select the suitable subjects for gathering the notable professors and researchers in each study realm,’ wrote the official website of the conference.

‘In regarding to achieving this scientific prophecy, the current conference Patterns of Regional Orders in Post ISIS Era aims to study the developments in discourse and tactics of ISIS after the end of its Caliphate in Iraq and Syria also the establishment of new security orders in different regions. We hope that in the end of this gathering, through the participating of intellectuals and researchers in different fields the aims of Conference will be achieved.’