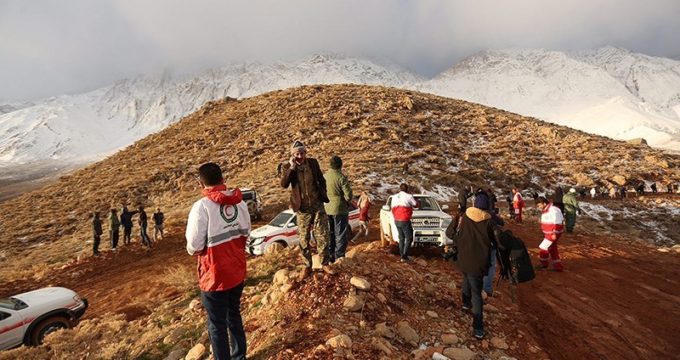 February 24, The Iran Project – Eventually on Wednesday (Feb. 21), after four days of zealous endeavors, the Iranian rescue workers managed to spot the bodies of 45 passengers of an Aseman Airliner that crashed with 66 people on board in the country’s mountainous region on Sunday (Feb. 18) morning in southwestern Iran

According to the mountain climbers and rescue workers who had reached the site of the plane crash close to Semirom, south of Isfahan Province, 15 of the bodies were identifiable.

Air controllers said the plane went off radar screens 50 minutes after take-off from Mehrabad airport in Tehran at around 8:00 am (0430 GMT).

The Islamic Republic of Iran Broadcasting (IRIB) said the plane crashed around 23 kilometers (14 miles) from Yasuj, some 500 kilometers south of the capital.

Franco-Italian planemaker ATR has a deal with flag carrier Iran Air for the delivery of 20 ATR 72-600 passenger planes. The company delivered eight aircraft in 2017 and plans to deliver a further 12 by the end of this year.

On Wednesday morning (Feb. 21), Iran’s Army Spokesman General Shahin Taqikhani said  that adverse weather conditions has made it imposslibe for the helicopters to continue aerial operation for transferring bodies of victims of the doomed ATR plane.

After an intense search operation for the missing flight, choppers of the Islamic Revolution Guards Corps (IRGC) found charred wreckage of the plane bearing the Aseman Airlines insignia on Tuesday (Feb. 20).

Citing the heavy fog that has reduced visibility to only 2 meters in the zone and has prevented any helicopter flights, General Taqikhani said the rescue teams were figuring out how to transfer the bodies on the ground.

’ Mohammad Saeed Sharafi, an official with the Civil Aviation Organization of Iran (CAO), announced that due to bad weather conditions, the black box of the ATR72 aircraft has not yet been found, adding that “A French expert group has gone to the crash site, and will start its work when the weather becomes better.”

The Iranian Red Crescent Society (IRCS) had announced earlier that 80 search teams were conducting an operation at Mount Dena in the Zagros mountain range after weather conditions improved.

In a meantime, four IRCS helicopters had flown over the region as part of efforts to find the crash site. Iran’s Air Force F-14 fighter jets also flew over Dena Mount while army parachutists and commandos along with mount climbers continued the ground search and rescue operations.

Civil Aviation Organization (CAO) announced that seven French personnel arrived in Tehran on Tuesday night (Feb. 20), to cooperate in the investigation into an ATR plane crash in central Iran.

Three members of French government’s Committee on Investigating Incidents and four members from the factory producing the plane arrived in Tehran.

According to international standards, the country designing and manufacturing a plane can send a representative to participate in investigating the cause of a plane crash, CAO said.

According to the Civil Aviation Organization, the airplane’s engine has been produced in Canada, which has voiced readiness to send counselors from the factory to join the investigation process.

Besides, Russia’s Ministry of Emergency Situations (EMERCOM) provided Tehran with the coordinates of the crash site of an ATR-72 passenger plane.

Moscow’s aid came after Russian Minister of Emergency Situations Vladimir Puchkov received a request of assistance from the Iranian government to determine the coordinates of the crash site by means of space monitoring.

The Russian ministry provided the Iranian military attache in Moscow with the needed data and information which was then relayed to the Iranian foreign ministry, Iran’s Civil Aviation Organization and a representative of the country’s crisis headquarters.

Iran banned flights of all its ATR-72 aircraft following the crash of an ATR passenger plan.

“In order to make sure about improvement of this type of aircraft’s safety, it is necessary to stop their flights temporarily,” the Civil Aviation Organization of the Islamic Republic of Iran’s Public Relations Department said in a statement on Friday.

Following the incident, several high-ranking Iranian and foreign officials in separate messages condoles the Iranian nation and government over the deadly incident.

Supreme Leader of the Islamic Revolution Ayatollah Seyyed Ali Khamenei and President Rouhani in separate messages expressed condolences over deadly plane crash claiming lives of passengers as well as crews on board.

The contract between IranAir and ATR to buy 20 ATR 72-600 aircrafts was signed by the officials of both countries.

The 70-seat ATR planes are aimed at domestic routes, which Iran seeks to revitalize after the lifting of sanctions in early 2016.

Iran is also renovating its aging fleet for international or long-distance flights under deals signed with Airbus and Boeing to buy a total of 180 passenger jets.

This is while officials at the Trump administration are using a case against an Iranian airliner to thwart a multibillion-dollar deal between Boeing and Iran Air for the sale of new passenger planes, US reports say.

Trump has taken an aggressive stance on Iran, and pledged to ditch a landmark nuclear agreement which made the Boeing deal possible if radical changes are not made in the accord.

Under the deal, limits were put on Iran’s nuclear activities in exchange for, among other things, the removal of all nuclear-related bans against the Islamic Republic.