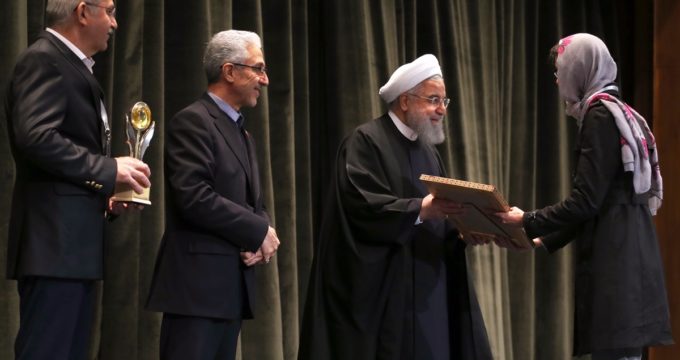 MNA – Laureates for the 31st Khwarizmi International Award (KIA) have been honored on Sat. for their remarkable achievements in science and technology during a ceremony attended by President Rouhani.

The ceremony was held at the IRIB International Conference Center in Tehran in the presence of President Rouhani and Minister of Education Mohammad Bathaei, and a number of Iranian and foreign researchers.

The event aims at recognizing outstanding scientific achievements made by researchers, inventors and innovators from all over the world.

This year’s edition of the Award received 337 Iranian projects, and 133 foreign projects from 49 countries. Ten Iranian and five foreign researchers were honored for their contributions as KIA laureates today.

Foreign researchers honored as the 31st KIA laureates include: Prof. Eric Vivier (France) for his research on harnessing innate immunity against cancer; Prof. Jianfang Wang (Hong Kong, China) for his research on Colloidal Plasmonic Metal Nanocrystals; Prof. Majed Chergui (Switzerland) for his research on unravelling the fundamentals of solar; Prof. Katharina Gaus (Australia) for her research on Single molecule imaging of T cell receptor signaling; and Prof. Dr. Burkhard Büdel (Germany) for his research on Role of lichens and cyanobacteria in biological soil crusts.

The KIA is instituted by the Iranian Research Organization for Science and Technology (IROST), affiliated with the Ministry of Science, Research and Technology.