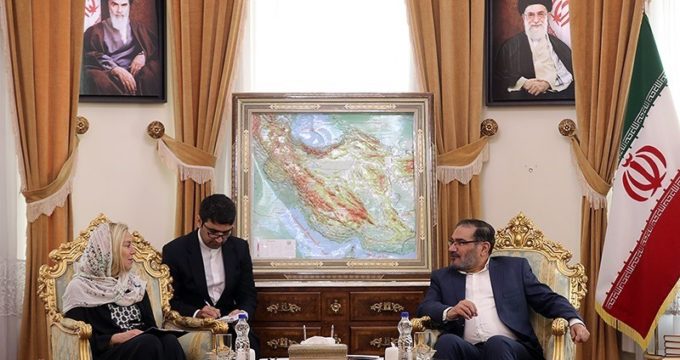 IRNA – Secretary of Supreme National Security Council Ali Shamkhani said on Wednesday that the US national security and nuclear doctrine in the new era pose a serious threat to global peace and violates the United Nations Charter.

Shamkhani made the remarks in a meeting with Dutch Minister of Foreign Affairs Sigrid Kaag in Tehran on Wednesday.

The Islamic Republic of Iran and the Netherlands welcome expansion of political, economic and security cooperation, Shamkhani said, adding that cooperation between Iran and European Union will benefit peace and stability of the region and the world.

After implementation of the Joint Comprehensive Plan of Action (JCPOA), grounds were prepared for enhancement of trade and investments mainly in energy and technology sectors, he said.

Violation of the JCPOA and US bullying have caused countries to be pessimistic about and lose trust in the US administration, he said, adding that Iran has seized the opportunity to unmask the real goals behind Washington’s anti-human and illegal sanctions for its trade partners, urging them to stop using US dollars in their transactions, he said.

All should spare no efforts to put an end to US madness in its new approach which threatens global peace, he said.

Daesh terrorist group has been annihilated through cooperation and coordination among Iran, Syria, Iraq and Russia in west Asia, Shamkhani said, adding that evidences indicate that the US is relentlessly trying to revive terrorist groups in the region and north Africa at the expense of global security.

Europe should stop merciless massacre of people in Yemen by Saudi Arabia, he said, adding that silence on such crimes being committed against defenseless women and children in Yemen should be regarded as complicity in those crimes targeting the impoverished country’s resources and infrastructures.

Terrorism is not limited to any geographic boundaries the activities of terrorists have spread to Europe, he said.

Unfortunately, the miscalculation of some western politicians and their support for the idea that terrorists are divided into good and bad ones have put the security of European citizens at risk, Shamkhani said.

The Dutch foreign minister, for her part appreciated Iran’s commitment to the JCOPA and its sound implementation and said this would undoubtedly meet the interests of both sides in various political and economic fields. She said all should do their best to urge the US to stick to its commitments under the JCOPA.

Lauding the significant role of Iran in fighting terrorism and organized crimes, she said the Netherlands government intends to broaden all out cooperation with Iran in launching joint projects and making investments in the country’s infrastructure.