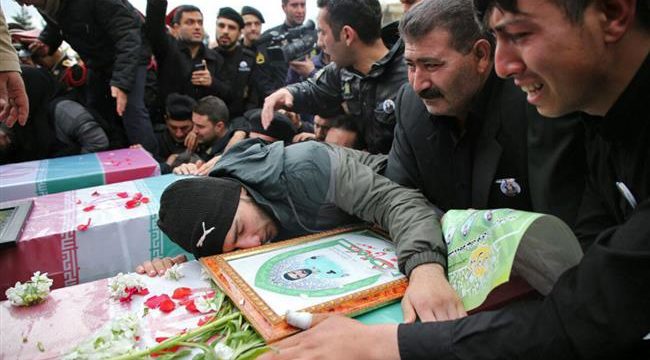 Press TV- Iranian mourners have held a funeral ceremony for the police forces who lost their lives in a recent wave of attacks by members of a Dervish cult in northern Tehran.

The funeral procession was held in the capital Tehran on Thursday with several Iranian officials, including Interior Minister Abdolreza Rahmani Fazli and Police Chief Brigadier General Hossein Ashtari, in attendance.

The attacks took place overnight on Monday during an unauthorized gathering by the so-called Gonabadi Dervishes near a police station, during which they engaged in clashes with ordinary people and police forces, according to officials.

During the clashes, an attacker ploughed a bus through a group of policemen, killing three of them.

Two members of the Basij volunteer force also lost their lives in separate car-ramming and stabbing attacks at the site. A funeral ceremony was also held for the pair on Wednesday.

Speaking at the Thursday funeral, the Iranian interior minister said the deadly riots in northern Tehran were yet another plot designed by enemies to put pressure on Iran.

“Over the past months, we have witnessed a host of pressure tactics in various areas…which are indicative of hostilities by the US and the Zionist regime,” Rahmani Fazli said, adding, “We are well aware of their plots.”

The Iranian police chief also addressed the crowd of mourners, vowing that law enforcement forces will give a firm response to any group seeking to disrupt public order and security.

“We do not at allow any cult, group or political movement to endanger security, and we will decisively deal with them,” Ashtari added.

The Iranian president says violence against police will never be tolerated, in reaction to Monday’s attacks in Tehran that left 5 security forces dead.

More than 300 people, among them the drivers of the bus and the car as well as the main elements behind the incident, had been arrested.

In a statement on Wednesday, the Dervish cult strongly condemned the attacks, calling for the perpetrators of acts of violence to be brought to justice.