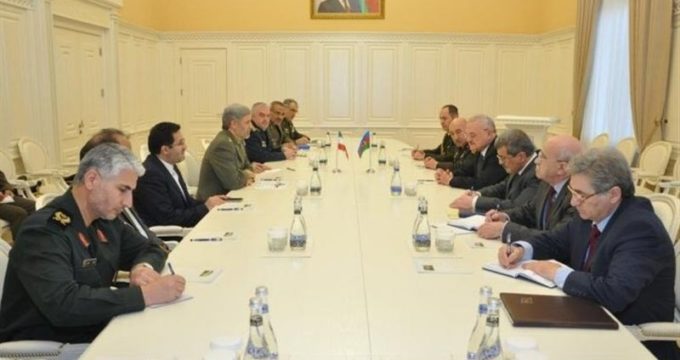 In the meeting with the Azeri premier on Wednesday evening, Brigadier General Hatami said the Islamic Republic is determined to promote brotherly and cordial relations with Azerbaijan.

He further emphasized that defense and military ties between Tehran and Baku are currently at “a very good level” and expressed the hope that the relations would develop to a “strategic level”.

Rasizade, for his part, hailed the growing ties between Iran and Azerbaijan and said that given the commonalities between the two countries, bilateral relations should further develop in various fields, economy in particular.

In a separate meeting on the same day, Brigadier General Hatami and the Azeri minister of defense industry discussed closer cooperation between Tehran and Baku in the production of military equipment through using modern technologies.

Heading a top military delegation, General Hatami has travelled to Baku at the invitation of his Azeri counterpart Zakir Hasanov for a two-day visit.

Speaking to reporters upon his arrival in Baku on Wednesday morning, the Iranian general said his visit could contribute to regional security and stability and also to closer bilateral ties.

In February 2016, Aliyev paid an official visit to Tehran, during which the two sides signed eleven memorandums of understanding and agreements to promote mutual cooperation in a range of fields.