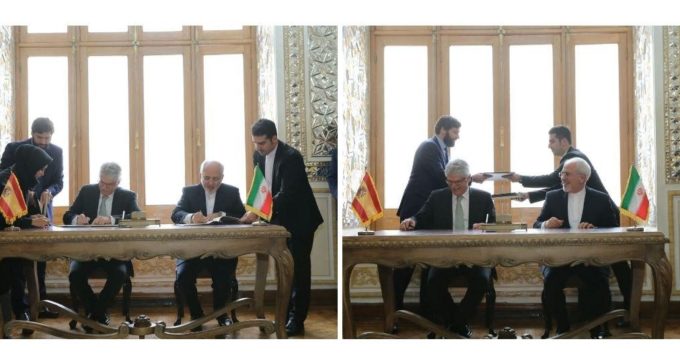 IRNA – Two memorandums of understanding on politic and railway transportation were signed by the Iranian and Spanish foreign ministers on Wednesday.

Mohammad Javad Zarif in a meeting with his Spanish counterpart Alfonso Dastis emphasized the long-standing record of the two countries’ cooperation in all spheres.

Stressing the importance of implementing the nuclear deal signed between Iran and world major powers in 2015, known as the Joint Comprehensive Plan of Action (JCPOA), the Spanish FM said that his country as a member of the European Union will remain committed to the deal.

At the end of the meeting, they signed an MoU on promotion of political consultations on issues of mutual interest. Another MoU was signed by the two countries’ railway officials.

Dastis arrived in Tehran on Tuesday evening for talks with Iranian officials.

He has so far met with Iran’s President Hassan Rouhani, and Foreign Minister Mohammad Javad Zarif, among other high-ranking Iranian officials.