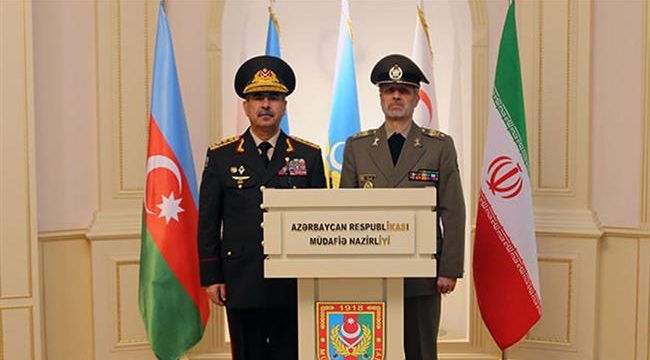 Iran committed to security of its neighbors: Defense minister

Press TV – Iran remains committed to the security of its neighboring countries and will help them maintain it, says the Iranian defense minister, who is on a two-day trip to Azerbaijan.

“Iran respects the sovereignty of all countries,” Brigadier General Amir Hatami said at a press conference in the Azerbaijani capital Baku on Wednesday.

“We are committed to this policy and have told our allies in Azerbaijan that this policy has helped us bring security to different parts of the region,” added Hatami, who was flanked by his Azerbaijani counterpart Zakir Hasanov.

Azerbaijan has been engaged in a dispute with Armenia over Karabakh, an Azerbaijani territory seized by Armenian separatists in a bloody war in the 1990s.

Some 30,000 people were killed in the conflict, which ended with a fragile truce in 1994. The two former Soviet countries are technically still at war and have yet to reach a permanent peace agreement on the issue.

Hasanov said Iran’s stance on the dispute, as relayed by Hatami, was to resolve it in a manner that would protect Azerbaijan’s sovereignty.

The two officials met earlier in the day and explored possible areas for military and defense cooperation.

Hasanov said the two sides had agreed to step up cooperation in military training and were looking forward to further expanding joint defense and military programs.

Referring to the strong religious and historic connections that exist between the two countries, Hatami said the potential was there for Tehran and Baku to speed up evolving ties.

Hatami said Aliyev and other Azerbaijani officials shared the same view as Leader of the Islamic Revolution Ayatollah Seyyed Ali Khamenei, who has emphasized on the importance of forging unique ties with the northern neighbor.

The Iranian official was scheduled to meet with Azerbaijan’s prime minister as well as the country’s minister of Defense Industry on Thursday.