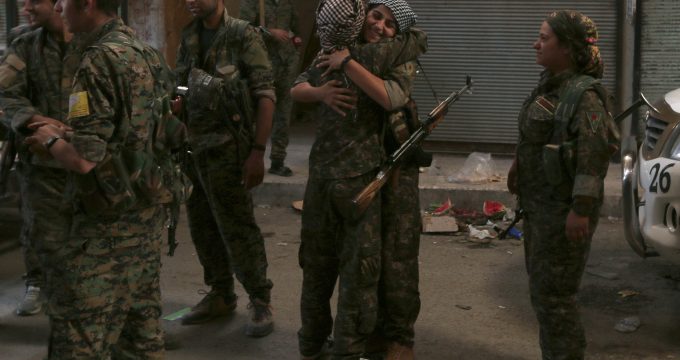 Good Manbij deal with US pipe dream of Turkish president

Alwaght– Over the course of past few years, the US-Turkey relations have been the worst in the history of the two countries’ ties as a result of the West Asia region’s developments. The root cause of the divisions between the allies can be sought in the Syrian crisis.

Since the beginning of the Syrian conflict in 2011, Recep Tayyip Erdogan, the then prime minister of Turkey, called for a safe zone to be set up in north of the crisis-hit country which borders southern Turkey. The Turkish leader eyed a buffer zone between Azaz and Jarabulus towns, an area with 90 kilometers of length and 50 kilometers of depth.

To the Ankara’s disappointment, the safe zones scenario was categorically rejected by Washington and European allies. The rejection of the plan very well marked the first spark of tensions between Turkey and the US. But the gap deepened since late 2014 when the US-led international military coalition supported the resistance of the Kurds in Kobani against a fierce offensive of ISIS terrorist group against the north Syrian city. The Turkish-US disputes boiled over when in March 2015, Washington helped found the Syrian Democratic Forces (SDF), a militant force which has the Kurdish units as the major force, with a small number of Arab fighters that marked rise of a strategic alliance between the US and the Syrian Kurds.

As the American-Kurdish cooperation unfolded, tensions between Ankara and Washington set new records. In early this year, the US Department of Defense said that the US-led coalition is working with its Syrian militia allies to set up a new border force of 30,000 fighters, a move that has added to Turkish anger over US support for Kurdish-dominated forces in Syria. Foundation of the Border Security Force made the Turkish leader lose his temper and immediately order a military campaign against the Kurdish-controlled Afrin canton in northern Syrian dubbed as Operation Olive Branch. Erdogan asserted that the offensive was meant to cleanse the Turkish borders of the terrorist groups.

On January 20, the offensive started, with the Turkish forces along with units of the Syrian militant group Free Syrian Army (FSA) striking the Syrian enclave from air and ground. But unlike the successful outlook envisioned for the anti-Kurdish operation by the Turkish strategists, the war, as of yet, has proven hardly triumphant for the Turks. The offensive pushed the US-Turkey tensions to their peak. Speaking ahead of a visit by US Secretary of State Rex Tillerson later last week, the Turkish Foreign Minister Mevlut Cavusoglu said Turkey’s ties with the US are at a make-or-break stage and that Washington needs to take “concrete steps” to regain Turkey’s trust.

“Our relations are at a very critical stage,” Cavusoglu said, adding “Either we will improve ties or these ties will totally break down”.

The tensions grew so wide that some sources familiar with the dispute did not rule out clashes of them in Manbij in the north once the Turkish army decides to extend its campaign to the Kurdish-ruled city.

In the meantime, the US Secretary of State Rex Tillerson visited Turkish on February 16. He met with his Turkish counterpart and discussed the Ankara proposal about withdrawal of the Kurdish People’s Protection Units (YPG) from Manbij to eastern Euphrates River to allow control of the city by the Turkish and US forces instead. Experts suggest that if Washington accepts this plan, many will consider it as the US bowing to the Turkish demands and turning back to the Syrian Kurdish allies. But will the US agree with Turkey? Will the US end its pro-Kurdish moves and return to its traditional ally?

US equivocal stances along with Tillerson visit

Despite the fact that Tillerson debated the case with President Erdogan and FM Cavusoglu, many believe that the Turkish optimism about the US advocacy of the Ankara policies in northern Syrian is highly chimerical. To understand the issue, they suggest, we can look at the budget the US allocated for backing the Syrian Kurd on the battleground. As the 2019 budget figures say the Pentagon is aiming to spend some $550 million on the training and equipping programs for the SDF, who are led by the YPG.

Two days before Tillerson’s trip, the US Secretary of Defense James Mattis on the sidelines of the NATO summit in Brussels had met with his Turkish counterpart Nurettin Canikli and called for Turkey to focus on fighting the ISIS terrorists. A statement by the Department of Defense suggested that Mattis in a meeting with his Turkish counterpart “called for a renewed focus on the campaign to defeat ISIS and prevent any remnants of the terrorist organization from re-emerging.”

Agreement on Manbij is yet to be finalized, with its implementation mechanism unspecified. The big obstacle ahead of the deal’s implementation is that a huge part of SDF are the YPG fighters, which are listed by Ankara as terrorist group. So, how will the US jointly control Manbij with Turkey which has the proxy Arab militias to deploy to the city? On the other side, the Kurds have been dreaming of connecting their northern cantons and paid a high price for gaining control of the city and apparently will not hand it over easily. Moreover, they have shown potentials of resistance during the Kobani and Afrin battles, and can firmly resist under tough conditions even without support from the big powers.

US and Turkey’s conflicting strategies and interests in northern Syria

Another important issue is the conflict of interests and approaches of Washington and Ankara in Syria’s north. Turkey finds the developments in northern Syria which borders its southern regions a threat to its national security and sovereignty. After all, Turkey has a big Kurdish minority population with historical records of secessionism. The Turkish fears are stoked as the US, as the Russian FM Sergey Lavrov put it, is moving towards setting up a military base in the Kurdish-controlled areas. Washington, moreover, seeks to split Syria and form local autonomous governments inside Syria.

While nobody can conceive of Turkey easing the resolve to crack down on the YPG and PYD (Democratic Union Party) which are seen as Syrian branches of Ankara’s archenemy Kurdish Workers’ Party (PKK)– labeled as terrorist organization by Turkey–, the US is not poised to break alliance with the Kurds. After all, Americans read the Syrian developments– to which the Kurds are a party– as a turning point in reshaping the future West Asia order in which the US struggles to check the Iran-led Axis of Resistance and Russia’s influence in accordance with its new national security doctrine. All these signal that Erdogan’s hope to get the Americans on his side is simply a pipe dream.