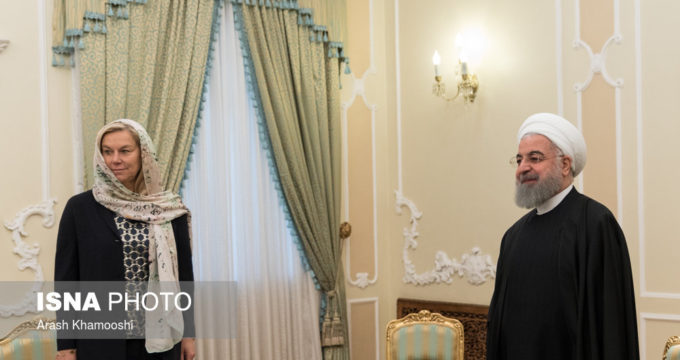 president.ir- President of the Islamic Republic of Iran expressed satisfaction over the amicable ties and cooperation with the Netherlands and stated: “Tehran welcomes further deepening of ties with the European Union member states, including the Netherlands and seeks to promote these relations to serve the interests of both nations”.

In a meeting with the Minister of Foreign Affairs of the Netherlands Sigrid Kaag on Wednesday, Dr Hassan Rouhani said: “There is no obstacle on the path of development of ties between the two countries and we are ready to cement these relations in all fields of mutual interest”.

Referring ample opportunities for development of relations between Iran and the Netherlands, the President said: “Business and trade between the two countries currently stands on €1bn and it must increase”.

He also emphasised the importance of banking relations as prerequisite to further deepening of ties, saying: “Iran welcomes Dutch companies’ participation in projects in the field of energy, environment, agriculture, transportation, tourism and saving energy”.

On the role of the Joint Comprehensive Plan of Action (JCPOA), Dr Rouhani said: “The JCPOA is a system that nothing can be added to or removed from it. The Islamic Republic of Iran will do its utmost to preserve it until the other sides live up to their commitments, and without a doubt, Iran will not be the first party, among the seven countries, to violate the agreement”.

“The Islamic Republic of Iran has had good cooperation with the International Atomic Energy Agency (IAEA) and the 9 reports by the agency confirms that Tehran has lived up to all its commitments despite the other side,” continued Rouhani.

Referring to purposeful attempts by some countries against Iran’s missile programme, the President of the Islamic Republic of Iran went on to mention the silence by international communities during Saddam Hussein’s invasion on Iran, saying: “Our people have experienced this against their country’s national security and rightly believe that the defensive power of their country is not negotiable”.

“However, we are willing to negotiate with our friends about the West selling deadly weapons to the countries of the region, especially selling fighters and lethal missiles that are used to slaughter and displace people and destroy infrastructures in Yemen,” he added.

Dr Rouhani also referred to the accusations that Iran is sending missiles to Yemen as completely incorrect and baseless, saying: “Instead of these projections, efforts should be focused on the immediate end of the war, ceasefire, helping the innocent Yemenis and, ultimately, preparing the ground for beginning of Yemeni-Yemeni dialogue”.

Dr Rouhani said: “Iran will support any effort in this regard and will be ready to talk with its friends in the European Union to strengthen security and stability in the region, as well as continue the fight against terrorism”.

The Dutch foreign minister expressed condolences to the Iranian government and nation on the plane crash, saying: “The European Union and the Netherlands, as part of the union, are determined to maintain and develop relations with the Islamic Republic of Iran in all fields”.

Sigrid Kaag added: “Dutch companies are ready to participate more actively in Iran’s projects for new technologies, agriculture and energy saving, and the Dutch government encourages companies to expand their activities in Iran”.

Emphasising the European Union’s commitment to the JCPOA, she underscored the role of the JCPOA in developing these relations in various fields, and stressed the need for continuation of talks between Iran and the European Union to strengthen confidence building in the fields of mutual interest.

Referring to Iran’s missile programme, the Dutch foreign minister said that Iran’s weapons programme for self-defence was legitimate and recognisable.

She also stressed the need for efforts to end the humanitarian catastrophe in Yemen and said: “The Netherlands believes that a ceasefire in Yemen should be immediately established and the process of a national dialogue should begin in order to establish stability and security in the country”.