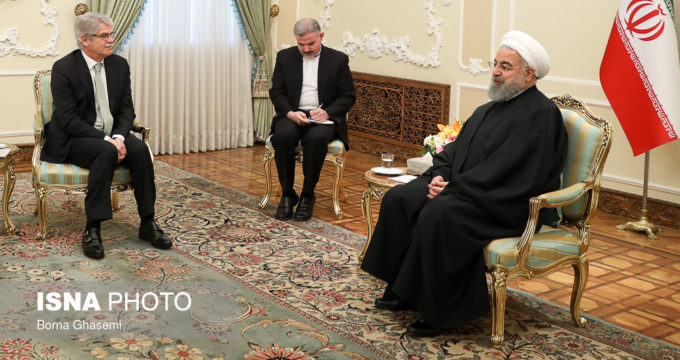 president.ir- President of the Islamic Republic of Iran referred to the ample opportunities and potentials for deepening ties between Iran and Spain and stressed efforts to develop and cement relations between the two countries in all fields of mutual interest.

President Hassan Rouhani met with Minister of Foreign Affairs and Cooperation of Spain Alfonso Dastis on Wednesday and said: “Deepening Tehran-Madrid ties will be beneficial to both nations”.

The president noted: “Today there are numerous opportunities for investment in energy, minerals, steel, environment and energy saving sectors in Iran, which Spanish investors can take advantage of”.

Dr Rouhani also emphasised the need for the development of scientific, academic and technological relations and cooperation in the fields of bio- and nanotechnology between Iran and Spain.

“Deepening of Iran-Spain banking relations is a good basis for promoting cooperation between the two countries and deepening business and economic relations,” he continued.

Dr Rouhani emphasised that the consolidation and full implementation of the Joint Comprehensive Plan of Action (JCPOA) is in the interest of the region and the world and facilitates development of the European Union’s relations with Iran, adding: “This agreement is the fruit of many years of negotiation between Iran and Europe, and all parties must adhere to their obligations in that regard and act accordingly”.

The president added that after the signing and implementation of the agreement there is no reason to bargain and renegotiate, saying: “The Islamic Republic of Iran will adhere to the JCPOA until the other party does so”.

Dr Rouhani also described regional security to putting an end to killing of people and clashes in Yemen and the fight against terrorism as the key issues that could be a base for constructive cooperation between Iran and the European Union, saying: “Today, the Yemeni people are having many problems because of bombardment and outbreak of diseases, and we must all help to bring these conditions to an end and pave the way for humanitarian aid”.

The president also emphasised the necessity and importance of fighting terrorism and terrorist groups in the region, saying: “Although a significant part of the terrorists’ power in the region has been eliminated, this does not mean that they are completely destructed, but after their defeat in Iraq and Syria, they have spread in other parts of the region and has created a dangerous situation that must be confronted with”.

Dr Rouhani said that everyone should feel responsible for long-term security in the region, saying: “Arms race in the region is very dangerous and all countries should be committed to refrain from turning the region into an ammunition depot”.

Spanish foreign minister Alfonso Dastis also expressed sympathy and condolences of the Spanish government and people on the death of a number of Iranians in the crash of the passenger plane, and referred to the long-standing and friendly relations of the two countries calling for the development and strengthening of all relations and cooperation between Iran and Spain.

The Spanish foreign minister described Iran as a powerful and influential country in the region, and hoped that the development of cooperation and consultations between Tehran and Madrid would lead to the development and strengthening of stability, prosperity and security for the people of the region.

Pointing out that there are good potentials for the development of inclusive relations between Iran and Spain, especially after the JCPOA, Dastis said: “We must work hard to further deepen relations between the two countries in various sectors, including agriculture, industry, environment, science and academia, commercial and economic, and regional and international cooperation”.

The Minister of Foreign Affairs and Cooperation of Spain also referred to the need for the intervention of influential countries in the region to end the humanitarian crisis in Yemen, and continued: “We believe that all countries should work hard to establish peace, security and stability in the region, and in this regard, any arms race must be prevented”.