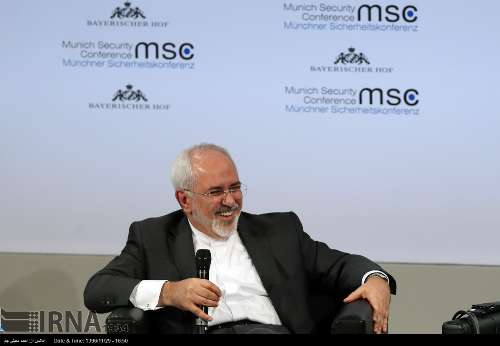 Zarif’s message of peaceful cooperation at the Munich Conference

Iranian Diplomacy | Kaveh L. Afrasiabi: Iran’s Foreign Minister, Mohammad Javad Zarif, delivered a powerful defense of Iran’s foreign policy particularly in the Persian Gulf region, reiterating the need for greater regional cooperation among the littoral states, simultaneously criticizing the “erroneous policies” of certain countries in the region that resulted in an unprecedented level of chaos and instability in the region.

Calling for the establishment of a forum , for regional dialogue to address the plethora of security issues in Persian Gulf, Zarif invited the other states to join Iran in creating it. His message fell on deaf ears with the Saudi foreign ministerAel al-Jubeir, who once again used the podium to demonize Iran and simultaneously paint a rosy picture of his kingdom as the abode of peace and civility, whitewashing the continuing Saudi atrocities in Yemen that have caused an appalling humanitarian catastrophe.

Stressing the fact that the entire region is beginning to recover from the great havoc wreaked by the ISIS and other terrorist groups, Zarif went into considerable details about Iran’s proposal for a new Persian Gulf security framework that would be “inclusive” rather than exclusive and accept the differences instead of ignoring them. From security networking to confidence-building steps a joint task force on such issues as nuclear safety to eventualy a “non-aggression pact” based on the norms and principles enshrined in the UN Charter, above all mutual respect for territorial sovereignty and non-interference in the domestic affair, Iran’s proposal clearly resonates with the basic national security needs of all the states in the region and thus presents “the only viable alternative.” Zarif’s tone was clearly conciliatory toward Iran’s Arab neighbors and he repeatedly reached out to the Saudi and other regional leaders to cognitively move beyond narrow-minded and sectarian tendencies and address the issues of common concern among all the states.

The concrete steps for a more stable and peaceful Persian Gulf mentioned by Zarif are, sadly, unlikely to be accomplished so long as Iran and Saudi relations remains stranded in a poisonous environment, in light of Minister al-Jubeir’s hostile presentation that promised more, not less, Saudi-led Iranophobia.

Criticizing Iran’s political system at a time when the Saudi Kingdom has been making a huge leap backward with arbitrary arrests and the sheer absence of any meaningful step toward democratic reform, al-Jubeir in fact emulated another speaker at the conference, Israel’s Prime Minister Benjamin Nethanyahu, who was lambasted by Zarif during the Q & A period for doing everything possible to prevent the Iran nuclear deal (JCPOA) and, failing, and now doing all he can to destroy it. Another speaker, former US Secretary of State John Kerry, a leading negotiator of the JCPOA, strongly defended the JCPOA against the Israeli criticisms, reminding the audience that no Iranian leader would ever enter into negotiations with the US if the US walks out of the nuclear deal. This and other pro-JCPOA statements by various European speakers reflected a strong international consensus in favor of the deal, which President Trump has threatened to discard unless it is complemented by additional provisions.

But, in the aftermath of recent Israeli aggression inside Syria, Zarif spared no punches in hitting at Israel’s “daily aggression” in both Syria and Lebanon, a point also raised by some Arab speakers at an earlier panel. According to Zarif, it is Israel’s failure to answer the problems it has created through occupation and aggression against its Arab neighbors that is responsible for its current attempt to deflect attentions by targeting Iran, which is doomed to fail. Fresh from the India visit by President Rouhani, Zarif highlighted the importance of growing Iran-India ties in all fields, including combating extremism and rejected the notion that this was somehow against China’s interest. Indeed, Iran’s view is that it can and should enhance cooperation with all the important players including China and India, instead of sacrificing one for the other.