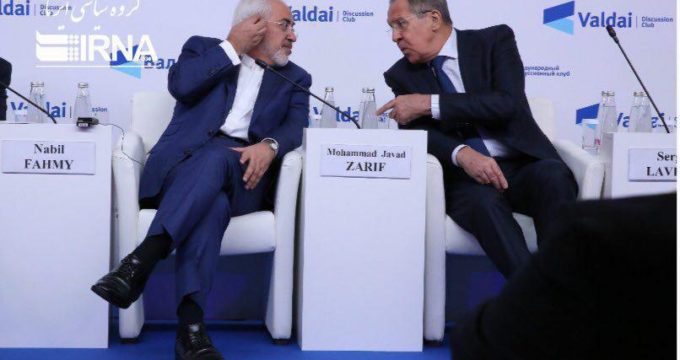 The conference brought together thinkers and officials from 30 countries to discuss various topics, including the situation in Syria in post-Daesh era, prospects of Palestine-Israel conflict, Yemen situation, mechanisms for helping Libya and de-escalation of regional conflicts.

While in Moscow, Zarif talked to reporters and addressed the conference dubbed “Russia in the Middle East: Playing on Every Field” which was inaugurated with the speeches of Zarif and his Russian counterpart Sergey Lavrov on Monday morning.

Meanwhile, Zarif also held talks with his Russian counterpart after the event.

Talking to reporters, Zarif stressed that ran has no military bases or military presence in Syria.

“What happened in Syria on Saturday [February 10]? Israel violated Syria’s airspace several times. It should be noted that Israel is permanently bombing Syria. And Syrian forces had managed to down an Israeli aircraft for the first time,” Zarif said.

Addressing the gathering, Zarif said despite the territorial defeat of ISIL and some other terrorist groups, and their eviction from much of the land in Iraq and Syria that they had occupied, we believe that we are still vulnerable to the formidable challenge presented by extremism.

He added that the heads and operatives of ISIL are at large with formidable weapons and hundreds of millions of dollars of stolen money. They have either returned to their insurgent and terrorist roots or joined sleeper sells.

Besides, Zarif and Lavrov also discussed important issues of mutual interest, including ways for strengthening bilateral ties, main issues and crises of the region, latest developments in Yemen and Syria, and the results of the Sochi talks on Syria.

Other topics of the talks between the two FMs were strengthening relations on tourism, holding joint economic committee, promoting banking ties, Caspian Sea, and political initiatives to resolve the Syrian crisis and the necessity to end the war in Yemen, as well as sending humanitarian aids to the war-torn country.

At the end of the conference, Iranian FM wrote in his Twitter page on Monday that “Delighted to address @ValdaiClub: With Russia’s sober strategic perspective and its growing influence in West Asia, it can play an instrumental role to help a paradigm shift in the Persian Gulf to one based on dialogue and inclusion.”