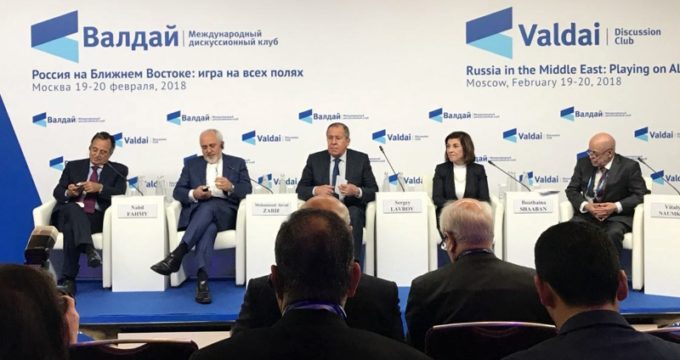 IRNA – The international Valdai Discussion Club’s conference 2018 began Monday in Moscow with Iran’s Foreign Minister as one of its participatants.

The conference dubbed ‘Russia in the Middle East: Playing on Every Field,’ began with the speeches of Iran’s Foreign Minister Mohammad Javad Zarif and his Russian counterpart Sergey Lavrov on Monday morning.

Iran’s Foreign Minsiter who arrived in Moscow on Sunday evening is one of the key lecturers of the event.

The conference is hosting scholars and officials from some 30 countries of the world. At the conference, the post-Daesh (ISIS) situation in Syria, prospects of the conflicts between Palestinians and the Zionist regime of Israel, situation in Yemen, helping mechanisms for Libya, Kurds issues, Iran and Russia’s role in the Middle East, and the ways to détente in the region will be discussed through eight panels.

The Valdai Discussion Club was established in 2004, aimed to promote dialogue of Russian and international intellectual elites and to deliver independent objective scholarly analysis of political, economic, and social developments in Russia and the world, according to its website.